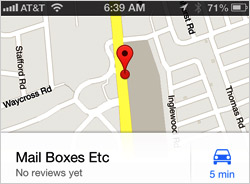 I am not sure exactly when Google Maps finally dropped into the Apple App Store last night, but by morning there were already 7,743 overwhelmingly positive reviews for the return of what had been the iPhone’s default mapping system. Huzzah! the Apple customer base seemed to cry in unison. Balance has been restored.

Truth be told, I was never especially disappointed in my everyday use of the iOS Apple-made mapping. Despite legendary failures in Apple's attempt to replace Google on its deck, I never had a problem in my use. The voice driving directions were especially welcome, and the isometric view with enhanced street labels worked perfectly for my navigator/wife. I felt that the Yelp integration limited the map's ability to discover places. Google’s index of local businesses is much better. But on the whole, the fuss over Apple’s maps was always more abstract than experienced for me.

Nevertheless, the elegance of Google's app is evident in just a few minutes with this iOS version. Map results are wonderfully clean, efficient and compact. It stacks map view, key call and sharing functions and street view into a single screen. Walking and public transit direction are available at the click of a button that may be a tad too small. But even the voice directions boast a slightly more pleasant female synthesized voice than Apple's. The vector-based maps are very responsive and pliant to zoom, pinch and twist maneuvers.

Google is issuing an SDK for developers so they can integrate most of the aspects of the app into their own app. Expect a lot of app updates employing Google's tools.

And so the great rivalry continues onto its next stage. Of course, other excellent maps are already available on iOS, and Apple even highlights these alternatives as part of its public mea culpa over the iOS 6 maps fiasco. But Google's entry back onto the platform is the one that really matters. They set a high bar for Apple to meet.

In large part this is a press and PR war more than one that is being fought over the actual experiences of users. Although I experienced no problems with Apple's maps myself, my wife resisted upgrading her iPhone to iOS 6 simply because of what she heard about Apple's own maps. For her, maps, accuracy, and reliability were critical, and the controversy had even penetrated her tech-averse bubble.

But for me, it is Google’s increasingly seamless cross-platform integration that is selling me on its iOS apps. On first launch, the maps app could see all of my recent desktop map searches for easy recall of what I was researching on another screen. This is invaluable. Likewise, I find myself using the Chrome browser on the iPad more frequently because of its integration with my desktop, Mac Air and Nexus 7 counterparts. In my mind, seamlessness is Google's chief selling point now. It is not the power of vector mapping or gazillions of locations. In the war for multi-screen dominance, it is not the provider’s data that matters so much as it is my data and how easy it is to access, recall, push, pull and apply anywhere.