Does My Finger Look Fat On This Phone?: Google Accidental Click Fix 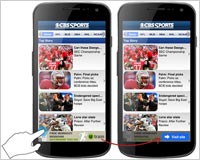 Let's start by dispensing with the "fat" problem. The now-legendary "fat finger" issue in mobile advertising seems to me as much a "fast finger" issue as one involving obese digits. And since the rant has started, I am not too fond of a construction that targets the user as somehow to blame for clicking through unintentionally on a diminutive mobile ad unit. In my personal experience, most times that I mistakenly click on an ad it has more to do with an overenthusiastic scrolling swipe that catches the top edge of an ad, and on interstitials, we have all seen the game involving the Lilliputian “close” box designed to incur a mistaken click. Layouts often seem to encourage mis-clicks. And, come on -- some of us are packing five-inch screens now in our pockets.

Another way to look at the mobile ad format is that traditionally ads were supposed to be visually demarcated from editorial content to maintain clear distinctions. But on a touchscreen, last-gen online Web banner, ad formats need to be kinetically demarcated from content as well. The ad is behaving the same way as all other content on the screen, and it probably shouldn’t on a platform that is small and requires imprecise input. The problem is that the design, not the user, failed to adapt fully to a touchscreen. Step up, America! Your fingers are not fat.

But the ads can be pretty dumb. Google adds some overdue intelligence to its ad units that recognizes the unique interactive environment of small touchscreens. The company announced late last week that “confirmed clicks” technology would appear not in all of its units. Their research finds that most accidental clicks occur on the outer edges of the unit "likely when you’re trying to click or scroll nearby content," writes Product Manager Allen Huang in a blog post.

Now, when you click on the outer edges of an ad unit, the ad will prompt you to confirm the interaction by popping up an intermediary "Visit site" button for a second click.

Huang says that early testing shows a slight decrease in click-through rates with these units, but that they "notably improve conversion rates."

Anything that improves the mobile ad experience is welcome, especially when it communicates to the users that the ad economy is being respectful of the ways they interact with their devices. Many of us have repeatedly said that mobile platforms offer digital marketing the opportunity to reset their relationship with users. From spam to whack-a-mole banners, elusive close buttons to adware, many users associate online advertising more with trickery and borderline behaviors than with fair exchanges of value. The opportunity is here for a fresh start.

One place to start is to stop callng mobile users' fingers "fat." We are just "big-boned."