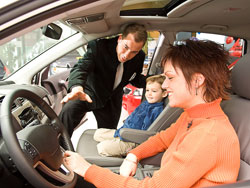 As most industry observers know, the quality and durability gap between auto brands has been shrinking for some years now. Now convince shoppers of that, as consumer perception famously drags its heels. It seems, however, that what people think about the fit and finish and solid "thunk" from a good tire kicking has caught up to reality.

A discovery from the 10th annual J.D. Power & Associates' Avoider Study, which looks at why consumers avoid certain models is that what shoppers believe about how well a car is made is becoming less of a factor, meaning that new-vehicle shoppers are considering more models before making their purchase decision.

Because of all of this, shoppers' auto consideration list is getting longer as new-vehicle shoppers now consider an average of 3.3 vehicles in 2013, compared with 3.1 in 2012 and 2.9 in 2010 (that's an average, obviously -- it doesn't mean a shopper is looking a three cars and the trunk of a third, just to be clear.) In addition, J.D.P. finds, fewer shoppers (21%) in 2013 purchased their vehicle without cross-shopping other models, compared with 26% last year and 29% in 2010.

This is good news for brands that have been shackled to build-quality ads that rely on third-party endorsements (such as those from J.D. Power). Now they can move on to the fun stuff, without worrying so much that consumers will think they are spotlighting the brand to distract them from shoddy construction. In other words, it lets them do more brand differentiation exercises and talk about more interesting things: styling, technology and performance, for instance.  “Improved actual and perceived reliability has leveled the playing field, allowing many manufacturers to be considered among new-vehicle shoppers that may not have been considered in the past,” said Jon Osborn, research director at J.D. Power. “Factors such as gas mileage, styling and comfort play an important role in the decision-making process. The study findings suggest that marketing a brand image is just as important as building reliable vehicles.”

Said Osborn: “The impact that design and brand image have on new-vehicle shoppers is substantial. Shoppers are concerned about what the vehicle says about them as people and how it can express their individual tastes, just as much as it is about being reliable or holding its value throughout the tenure of ownership.”

J.D. Power finds, not a big surprise, that gas mileage is the most influential purchase driver, with 15% of new-vehicle owners -- with a younger skew -- in 2013 saying it was the primary reason for purchasing their vehicle.