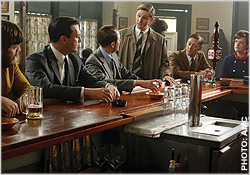 You say tomahto, I say tomato. You say catsup, I say ketchup. Within the out-for-blood prism of “Mad Men,” it all comes down to more whoredom, anyway, and then you die!

Of course, you also get your betrayal, hypocrisy, and misery on the side. Why don’t we call the whole thing off? Because with “Mad Men,” we always get a little extra sumpin’ sumpin’ to keep us going. This week was a very cleverly written, nicely shot little tinderbox of an episode full of ripe text and images to chew over for a long, long time. For starters, there is Joe Namath and friends, selling us on all-American napalm!

The title, “To Have and to Hold,” (the name of Megan’s soap opera) is apt, since it is really a Shakespearean soap opera within a soap opera.

Plus there was a whole tomato subtheme, with the fight for Heinz Ketchup (the condiment of kings), and Scarlett (who wore a scarlet sweater -- if not a letter -- in the office.) And Bert Cooper’s gorgeous new office, filled with red Chinoiserie. And Joan (let’s call her “Red,” as Roger used to) and her friend Kate, painting the town red, if not electric. 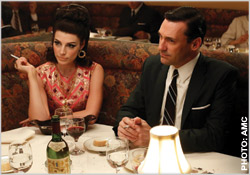 And Megan’s fantastic metallic dress at dinner with the would-be swingers, her boss and his wife, who reminded me of Jacqueline Susann (“Valley of the Dolls” author ) and her husband.

Plus we got the dawn of Dawn! That one act of Joan handing over the keys to the time clock and the supply closet to Dawn was brilliant -- even if Joan claimed it was a punishment. Because it showed that a) Joan was moving forward, finally, and helping Dawn; and b) when you think about it, that’s really all there is in life: the idea of time and how we choose to fill it. (Perhaps it was also a reference to the most important existential text of the twentieth century, “Being and Time,” by Martin Heidegger, but I digress.)

But first, let’s go back to the last scene from last week, that pathetic visual of Don rolled up in a ball at the door of his apartment. That suggested his act of peeking through the keyhole at his stepuncle’s whorehouse as an unwanted child, seeing his pregnant stepmother being taken by the old rooster on the bed.  It was a scene so traumatizing and bleak that he’s never gotten over it. (And in his own way, he keeps repeating it.) 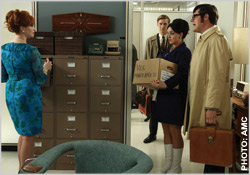 This week, Don did a lot of spying through doorways, (listening to Peggy’s pitch, especially when she repeated his line, “If you don’t like the conversation, change it.”) He was also closed off in tiny rooms: When Sylvia, (who, as someone on Twitter said, looks just like Betty Rubble) hops on the elevator in her apartment building with Don on it, he locks the doors, and they kiss madly. One of the saddest scenes ever took place in Megan’s tiny dressing room. Pete’s little bachelor pad was the meeting place for the sordid affair with the ketchup guy.

At the agency, Don’s the only one who can get into the secret lockbox of a room where Stan and his beard are cooking up the clandestine recipe for “Project K,” the Heinz pitch. In the end, the project was such a disaster, filled with so many burned bridges and betrayals, that they might as well have been creating a bomb.

And by the way, Scarlett, you’re fired!

That was a new low for Joan: screaming such a vulgar, Trumpian phrase across the office. But I was thrilled that we got a little window into Joan’s life this week. (And that we saw the baby, who looks about 14 months old, although it seems he’d be about four or five by now, doesn’t it?) 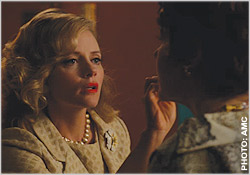 Joan seems to have survived by making her life very small. Same apartment, same overbearing babysitter (her mom), same office life. Because, despite the partnership, it seems clear that Joan is still fulfilling the role of the office manager -- the same job she did some nine years ago -- and showing a bit of hypocrisy in firing a lively and devoted secretary for stretching the rules.

It was interesting that Joan's friend was selling Mary Kay cosmetics. That business, with its much-mocked pink Cadillacs for high-earning sales reps and managers, is the embodiment of the ironies of the women’s movement. To make it in a "man's world" and build a billion-dollar business, the founder had to make it all about extreme femininity and beauty. At the same time, the company provided a gateway for generations of women to enter the workforce and achieve financial independence.

Kate came to town to cheat on her husband and meet with Avon. The whole episode was about cheating, both personally and professionally. And it also suggested that everyone, especially in advertising, is either a pimp or a whore. After Megan’s fake love scene on the set, Arlene -- seeing Don standing in the wings -- told Megan, “Your manager is here.” (Meaning, your pimp.)

Even given his profound need to compartmentalize, it was hard to believe that Don could keep a straight face while calling Megan a whore for doing a fake sex scene on her soap opera. (He called Betty a whore at the end of their marriage, too.) 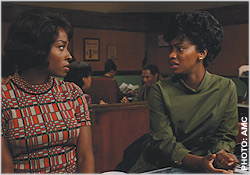 Is he playacting, trumping up his own reasons to leave her, working up some righteous indignation as a coward’s excuse to let her go? Or is he upset that he thinks she's been playacting for their whole marriage?

Does anyone feel anything genuine for anyone here? Peggy loves Stan, but she betrayed him. And his little moment of flashing her the bird in the bar was exquisite.

Partnerships, marriage -- these things provide no comfort. Nor does religion. Dawn tells her friend she’ll never meet a guy at church, because it’s “filled with harlots.”

But Dawn has the keys to the supply closet, and that’s enough to keep me going.

This week, seeking some naughty downtown nightlife, Joan and her friend made a beeline for the Electric Circus, an East Village hot spot in the late 1960s known for its "mindblowing" light and sound shows, and appearances by such groups as The Velvet Underground. Here's an original promo poster via @GlaserArchives.