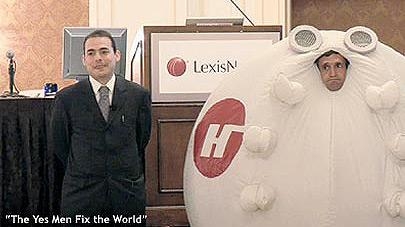 The Chamber of Commerce has dropped a long-running lawsuit alleging that the prankster group Yes Men infringed trademark by using the trade group's name and logo in a parody site.

In court papers quietly filed late last week, the business group said it was withdrawing the 4-year-old case because it has now obtained control over the domain used in the parody. “Given the age of the case, the defendants’ recent inactivity, and the National Arbitration Forum’s order transferring the infringing domain name 'chamber-of-commerce.us' back to the Chamber, the Chamber believes that further prosecution of this action is unnecessary at this time,” the group wrote.

The case stems from a 2009 Yes Men stunt poking fun at the Chamber of Commerce's stance on environmental issues. As part of the prank, the Yes Men held a fake press conference announcing that the business association had reversed course on a proposed climate change bill and now supports environmental legislation. The Yes Men also created a parody site that closely resembles the real site's media center page.

The Yes Men's effort briefly fooled some real news outlets, including Reuters, which reported that the Chamber of Commerce had changed its position on environmental laws.

The Chamber sued the Yes Men in federal district court in Washington, D.C., alleging that the parody used the group's trademark in a way that caused confusion. The business group also argued that the Yes Men used the stunt to promote the film "The Yes Men Fix The World."

But the satirists asked for the lawsuit to be dismissed, arguing that they had a First Amendment right to use the business group's logo as part of a parody.

The case was withdrawn before a court ruled on legal arguments. But while the matter was pending, the Chamber of Commerce filed a separate action to obtain the domain name the Yes Men used in the prank. That matter, filed under the Uniform Domain Name Dispute Resolution Policy, resulted in a pro-Chamber finding by an arbitration panel in July of 2010.