Episode 613: 'In Care Of,' Or, All Fun And Games Until Someone Is Shot In The Face 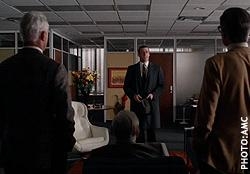 Season six began in hell -- well, actually, Don Draper was physically in Hawaii, lying on the beach next to his adoring, model-perfect, bikinied wife.

That would be the average person’s heaven. But with his trademark penchant for self-sabotage and creating chaos, Don brought along his own hell -- "Dante’s Inferno" -- courtesy of his downstairs neighbor Sylvia. She turned out to be another in his perplexing bevy of dark-haired mistresses who provide a sexual diversion. That allows Don’s mind to be someplace else, no matter where he is or what he’s supposed to be doing.

And for that reason, this was our season of disconnect and discontent.

Really, if Don can’t seem to get it together enough to be present and engaged, why should we? After a few of the weaker episodes, it was a little hard to hang in there with ole handsome puss, with his thoughtless, booze-related disappearances and bewildering screw-ups. It was painful to watch him so senselessly and repeatedly damage himself, his agency partners, his career, his marriage, his one male friendship, and worst and most unforgivable of all, his daughter’s psyche. Enough already!

From his own hell, back to heaven -- there was talk of a quick exit to California that never panned out, as that’s the place to which he typically flees. 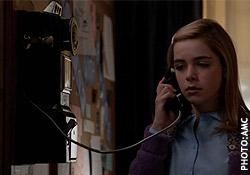 And yet, the season ended on Thanksgiving, with a cornucopia of things to be thankful for. (One of them was Joan’s little gold horn pin on her suit collar. She is an account executive on Avon now!)

If you recall, the first season also ended on Thanksgiving, with Don in an empty house, stripped of his family.  This episode, “In Care Of,” was all about properly caring for children and those you should cherish, and the idea of going “home.”  And it showed how all that discomfort and pain along the way brought Don to a place where he could no longer hide.

The superb and moving final minutes of the finale showed Don and his kids standing in front of a rundown old Victorian whorehouse in a dilapidated neighborhood in a rust belt town of Pennsylvania.  There’s a little African-American boy on the porch, sucking a red ice pop.

Unlike in Hawaii, where his thoughts were of death, here, in this grim and crumbling part of town, Don could come clean, and be light and free. Silhouetted in his black fedora against the cloudy blue sky, he could for the first time really look at the daughter he injured so badly, because he was finally free of the lies that he had invented to save himself, but were now destroying him.

And Sally, played by Kiernan Shipka, an actress who is so good she gives me goose bumps, could, in turn, look up and lock eyes with her father. For the first time, she could see him for the  “fixer-upper” adult he is. 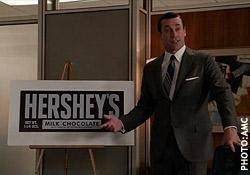 Don is now the empty house of his childhood. He is a monumental wreck in need of reconstruction, which will also result in the repair of Sally’s “broken” family.

I like to think that what finally allowed Don to hit bottom was, first, spending a  night in jail after punching out a minister and blacking out. (I loved his line, “Jesus had a bad year.”) But more importantly, he could also see that Sally was in so much pain that she was mimicking all of his addictive and avoidance behaviors.

Traumatized from having caught him in the saddle with Sylvia, and trying to bury that vision and fit in at boarding school, she faked her name on an ID, got drunk, and was placed in Miss Porter’s version of the hoosegow: the Infirmary. In a lovely phone call with his ex, Don was quick to tell “Birdie” (also now seemingly caring and soft) that she shouldn’t blame herself.

The pitch-perfect choice of music that underscored the ending, Joni Mitchell's “Both Sides Now” as sung by Judy Collins in 1967, refers to the show’s theme of twinness and duality; but the song also lent just the right note of gravity and wistfulness to the proceedings.  The song acknowledges that even with the passage of time -- and, one hopes, with achieving some wisdom and maturity -- it’s “clouds’ illusions I recall. I really don’t know clouds at all.” 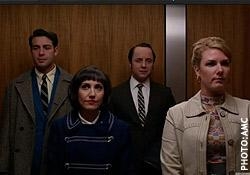 It was a bravura bit of writing and direction from Matt Weiner, and a pretty brilliant way to end the season. Don is now a clean slate. We don’t know if his  suggestion of  a “bicoastal” life (the first New Yorker ever to use that word!) with Megan means a separation or an estrangement. But in a pre-intervention style intervention, his work partners finally called him on his shit (with the Hershey meltdown, Roger told him he “shit the bed”) and told him to take an extended leave of absence.

The icing on Don’s icing was running into Duck at the elevator, who was shepherding in a new executive candidate.

No wife, no job, no particular allegiance to New York, and no drinking. The possibilities for Don next season are endless.

Now let’s get to the other doppelgangers: Pete is bloodied and bowed but seems ready for his own redemption -- now freed from his mother, who went overboard (in many ways), while in the care of manservant Manny, who, as Bob tells Pete, “couldn’t hurt a fly.”  A Spanish fly?

Not only did Bob not respect Pete’s demands to get Manny (Marcus Constantine, the name of two Roman Emperors!) away from his mother, but the two-fisted coffee bringer also manipulated a way to get Pete fired from Detroit. Turns out Pete can’t drive a stick (slightly symbolic) and knocked over a GM sign in a comic scene. 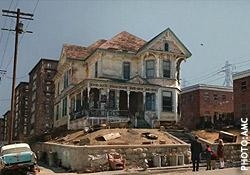 I was hoping for at least another severed limb -- but nothing was injured, except for Pete’s ego. He returned to New York, his home, but now without a home. In taking some of his mother’s furnishings, “the highboy” (an apt description of Pete’s condescending ways) and a chair, he tells Trudi that he drove with “a chair tied to the roof of the car like the Beverly Hillbillies.”

That’s quite a step down for a Dyckmann -- perhaps he’s sufficiently humbled to realize what he thoughtlessly gave up in his life with Trudy in an attempt to be Don Jr. Trudy tells him he’s “free” now, and he answers that it’s not the way he wanted it.

His moment with Tammy in saying goodnight to her was touching. Sleeping the sleep of the beloved was the theme of the evening, along with reinventing oneself in California. That’s where Pete’s headed; indeed, in 1968, it was a beacon of “free-ness,” a sun-kissed place sans history  where you could easily reinvent yourself.

That’s why Stan had the intention to go out there -- and it was shocking that Don not only stole the idea, but parroted his exact words about “homesteading” to Megan.

Now to Peggy.  Before this episode, a friend on Facebook was fuming that, as a young woman in 1968, with Twiggy coming on the scene and mod clothing and miniskirts abounding, Peggy “should be the hippest person in the room,” but looks so dowdy. My friend said she looked like an “account executive.”

That’s surely intentional. Peggy is a rigid personality, and she is as bad a picker of clothing as she is a picker of men. That’s why the scene of her in the low-cut black mini-dress with the pink bow was so dramatic. It wasn’t exactly chic, but she sure looked young and sexy, in an attempt to make Ted jealous. Last week, she called Don a “monster,” and she thought Ted was the opposite. 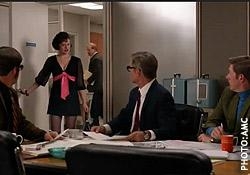 But after their lovemaking, Ted turned out to be similar to Don, since he thought he was giving Peggy a gift by fleeing to California with his family, and magnanimously allowing her to go on with her life alone. “At least you get a decision!” she snaps. In the end, Peggy is  wearing a pantsuit (for the first time!) in Don’s office, staying there to get work done over the holiday. She tells Stan that she’s there because it’s “where everything is.”  Indeed, in her world, that office is everything. For Don it was hell, will it be her heaven?

Certainly, the agency won’t function well with one creative director in California, and Peggy in New York minus Don.

But Weiner has the right idea in showing the ad migration to the West. Jay Chiat started Chiat/Day in 1968, and increasingly California was becoming a magnet for hot agencies. If the crew ends up in L.A., will “Mad Men” become more about thinly disguised TV writers?

And how will Don function stripped bare? The phrase now would be that Don is finally “standing in” or “owning” his “truth.” In the language of that time, Don finally achieved “consciousness.”  With addicts, however, relapses are often part of the process.

The world is blowing up in 1968 and 1969, and as we get closer to the times that we actually remember living through, it becomes tougher for Weiner to make it credible. Joni put her finger on it: “But something’s lost and something’s gained in living every day.”

At least Don and Sally are out of hell. And sadly, we are now in purgatory, waiting.

Thank you, commenters, for all the great insights and generosity. It’s been a blast. Please tell me what you thought of the finale, and what you predict for next season.

mad men, tv
38 comments about "Episode 613: 'In Care Of,' Or, All Fun And Games Until Someone Is Shot In The Face".
Check to receive email when comments are posted.
Read more comments >
Next story loading