When you brand your business with the name “Ensemble,” you may want to plan on others joining in. But that’s probably not what Interpublic’s Mediabrands had in mind, when a Chicago-based startup announced a new “one-stop digital services suite” with that name on Wednesday. You see, Ensemble is also the name of the branded content services division Mediabrands launched four years ago. And you know, agency holding companies are kind of partial -- and proprietary -- about brands.

One Interpublic insider said the news has already been passed on to Interpublic’s attorneys. An Interpublic spokesman said there was no comment on it.

How it might be resolved isn’t clear, because the new Chicago-based Ensemble isn’t technically in the branded content business, and it’s not even clear if it’s directly or indirectly in the advertising or marketing services business, but it is backed by venture capital firm Red Rocket Ventures, and it says it’s goal is to, “Fill a void in the market for entrepreneurs desiring do-it-for-me solutions from a one-stop team of digital experts who have proven they know how to quickly and efficiently scale up digital businesses,"according to George Deeb, its general manager, who is also a managing partner of Red Rocket. 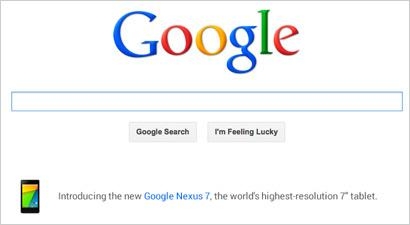 There are house ads, and then there are house ads. Lots of media utilize their own inventory to promote their own wares (think network TV promo spots), but their reach is a mere pittance to the house ad Google is running today on its “homepage.” As nondescript as it is, the tiny text-based ad for the launch of Google’s new Nexus 7 tablet is likely to get plenty of attention -- and conversions -- mainly because of its placement. It’s sacrosanct inventory, placed just below the Google Doodle, because the space never gets sold to outside brands, and normally is reserved for one of Google’s commemorative animated graphics recognizing the birth of some great historical figure, or invention of some great idea. So the placement of an ad launching a new version of what it claims to be the “worlds highest-resolution 7” tablet,” is premium indeed. You just can’t buy it -- unless you’re Google, of course. Actually, Google used the space for a house ad last summer when it launched the 1.0 version of the Nexus 7. What’s nexus, er next?