In June, I reviewed two questions in our ongoing survey regarding the media channels advertisers and their agencies might consider using as they think about where and how to engage their target markets of higher-income adults with meaningful messages.  That review generated some interesting feedback from a number of luxury marketers who asked if we could segment those insights by consumers who are planning to buy a luxury product or service in the next 12 months from those who are not.  We can, and that’s what this review does.

Of the 21 places where all consumers may see or hear advertising that we have been measuring, the following exhibit shows the top 12 in rank order for estimated reach.  Notably, five of the top seven channels or places to reach all American adults continue to be traditional (television, magazines, etc.), with websites coming in second and social media  seventh.  When a marketer focuses on these seven channels and all adults planning to buy luxury, only magazines' and social media's relative positions go up when compared with those not planning to buy luxury.

For those marketers who focus on consumers who are more affluent (the top 39% — adults with household income of $75,000 or more), consumers planning to buy luxury tend to pay more attention to advertising than all Americans do.  They also appear to favor traditional print (magazines and newspapers), while digital channels (websites and social media) are also reaching a greater proportion of these valuable luxury prospects.  As marketers go up the income scale and focus on either $250,000+ or $500,000+ household-income adults, traditional print channels remain strong as far as reach goes, while social media's and websites' reach declines. 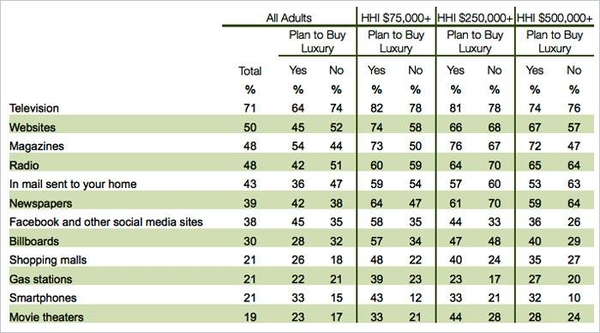 In addition to the potential reach of the 12 channels and places we just reviewed, we also probed consumers about their interest (or engagement levels) in the advertising they see or hear in those same sites.  According to our survey, there are large differences in the potential engagement levels of advertising, depending on the channel or place a luxury marketer might select.  The following exhibit shows the percent of consumers who had "considerable" or "some" interest in advertising they had seen or heard on each platform in the past 30 days.

Notably, as marketers start targeting higher-income adults who plan to buy luxury, the traditional channels tend to rise to the top positions for generating potential engagement in the advertising they distribute. 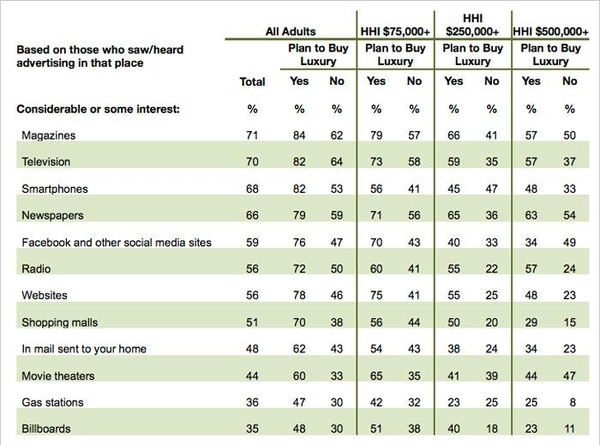 The following and final exhibit of this review brings the prior two exhibits together by summarizing the rankings of the top twelve channels and places by potential reach (advertising seen) and then potential engagement levels (advertising that elicits "considerable" or "some" interest) among those consumers who plan to buy luxury during the next 12 months, sorted by all adults' estimated reach.  For example, among consumers with household incomes of $75,000 or more, magazines ranked third for potential reach and first for potential engagement.  The engagement ranking is based on those who saw or heard advertising on the particular platform or place listed.  All rankings are based on the 21 platforms measured, not just the 12 shown in this exhibit. 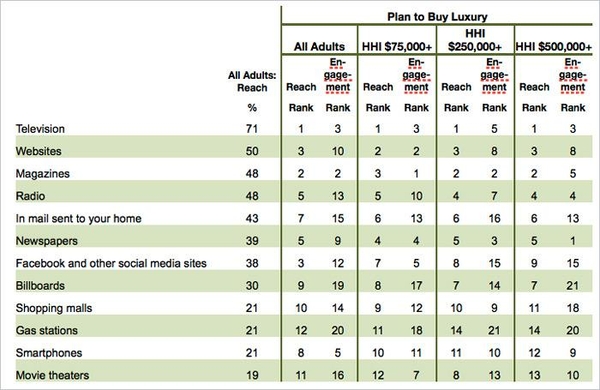