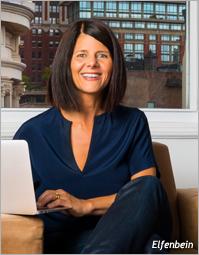 Elizabeth Elfenbein is officially known as “Partner, Creative” at health and wellness agency The CementBloc, and the title “Chief Happiness Officer” fits, too. “I put a lot of energy into ensuring that our company is a really positive place to be,” she says. “As a creative leader, your job is to make sure people are happy because if they’re happy, they’re going to be more inspired.”

There is a world beyond the walls of The CementBloc, of course, and Elfenbein, who has studied happiness and written about the subject on her personal blog MyLifeAsAFocusGroup.com, had been eager to find a way to spread joy on a wider level. But she needed a big idea, a means of stoking happiness that was accessible to everyone at any time and any place. Then it struck her. “I’ve got to create an app for that!” recalls the omma Creative Online All-Star.

After a few months in development, the Happy Fuel app was launched in May. Available for the iPhone, it provides a mobile space to store things that make one happy — be it an upbeat song, family photos or funny videos. People can also highlight locations that make them feel good — think a favorite vacation spot or the place where they met their mate — and record personal thoughts and memories.

As the title of the app implies, all these items are meant to serve as happy fuel, and people can even get a visual measurement of their happiness levels. They can also “pay it forward,” sharing their content via social media outlets like Facebook and Twitter to remind themselves of the good times and bring cheerful vibes to others.

At the moment, the app, which could hold appeal for people of all ages and backgrounds, is targeted at millennials who live on social media, and Happy Fuel is going out to universities to create awareness and enlist brand advocates.

“Our long-term vision is to start with one group, see how it takes off, and then be fairly nimble and fluid and really understand our groups and how we can best serve them,” Elfenbein says. “The idea will be to build a very immersive experience and then, over time, create more products that answer that.”

Happy Fuel, of which Elfenbein is founder, is a pet project for the creative leader whose partners at The CementBloc have given her funding and support for the entrepreneurial effort. The willingness to support endeavors like Happy Fuel was part of the draw when Elfenbein joined The CementBloc in 2007, coming from Wunderman where she was a senior vice president/group creative director working on accounts for such clients as AstraZeneca, Novartis and Pfizer.

At The CementBloc, Elfenbein’s role is to set the creative vision for a staff that serves clients ranging from Bristol-Myers Squibb to Celgene. Of her colleagues at the agency, she says, “They are very talented and think really differently.” Looking back at the agency’s work this past year, Elfenbein is especially impressed with the team’s multi-channel branding campaign—a mix of traditional advertising, guerilla tactics and social media—for the nonprofit Coore Foundation’s Girls Right of Way aka grow initiative, which aims to help at-risk girls realize their full potential.

That campaign actually grew out of Elfenbein’s
growsole project. In 2012 she led the creation of the pro bono campaign that employed everything from Flickr to YouTube to urge the donation of gently used shoes to be sent to children in developing countries. “It’s been a very interesting journey these last few years — crazy and exciting,” she says, citing both grow sole and Happy Fuel as projects that “keep me inspired so I can inspire.”

What’s next? “I’m hoping Happy Fuel becomes its own company,” Elfenbein says. “I hope it becomes something big and desirable and something that other people will really take to and help evolve with me.”