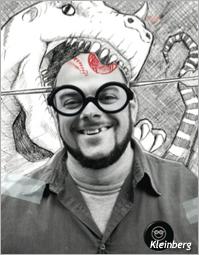 Every week, Traction ceo Adam Kleinberg spends a few mornings on the shores of Lake Merritt near his Oakland, Calif., home, practicing the martial art of tai chi. He attributes continued success of the agency he leads to this deliberate ritual of clearing his mind.

“It is a core belief that if we line things up correctly we can do anything,” he says. “I believe in myself and the people I surround myself with.”

A native New Yorker, Kleinberg was born in the Bronx and grew up in Rockland County. After graduating with an economics degree from Cornell, he flew out to see some classmates running a bar in Berkeley. One was living on a houseboat in Sausalito. He went to visit and never looked back.

Teaching himself Photoshop with the book “Photoshop Classroom in a Book,” Kleinberg pitched himself as a designer on Craigslist and his career was born. He was supposed to be a temp working two days a week for someone who was sick, but was so good they fired the other guy and gave him the job.

Among the stops along the way to independence were Think New Ideas run by mtvvj Adam Curry, and Tribal ddb, where he left frustrated by silos.

Traction began in a spare room of the apartment Kleinberg shared with his wife. When she kicked them out after two years, they took an office in San Francisco and the business really took off. sap and Macro Media came on as clients immediately and referrals fueled a steady stream of new business.

The agency ceo is a case study of reinvention and evolution.

Kleinberg started a designer. Next he became creative director. Then he handed the creative reins to Theo Fanning, his partner to this day, who was stronger in that role. Kleinberg became ceo and each year the agency grew, presenting new things to learn.

“I consider myself a constant student,” he says. “I voraciously seek out learning. I attend conferences. I seek out mentors, observe people I respect, and am humble enough to ask questions. This allows me to self-improve. I gave myself an mba in marketing and leadership.

“I have 100 micro-mentors. Every creative director I ever worked with I learned a lesson from. I’ve had employees who came in and I learned from them. I try to observe what makes them great and try to emulate them. It’s been a large part of how we approach business. We are an instructive storytelling organization.”

Among the many awards that approach has garnered are a 2012 btobMagazine Digital Campaign of the Year for Traction’s work on Accountemps. Traction built on a pre-existing campaign and took it to the next level to create the message that the best financial talent can be found there. Visit the Accountemps site to find an entire opus of work in a comic style reminiscent of The Office, and built around the mythical supertemp accountant Bob. (Nobody rocks a spreadsheet like Bob rocks a spreadsheet.)

It’s hilarious and it works. The campaign helped propel the stock price of Robert Half International from $26 to $36 per share. btob ranked the agency first or second digital agency in the nation four of the past five years.

“You can’t think of b2b as a function of B’s.They are people. It’s about b2p. A b2b customer has kids they have to make lunch for. They go home and watch American Idol. They get frustrated. How do we make someone laugh? Understanding what really matters. That truth.

“By extolling the virtues of Bob in funny vign-ettes, you’re able to take that core idea and express it in video/online/out of home and print.”

The “Adobe Real or Fake” campaign challenged audiences to guess if images were real or faked with Adobe tools. That won awards from Forrester, Ad:tech, Addy and Facebook Studio.

On the topic of Big Data, Kleinberg has strong opinions. “We have to get back to balancing the left side and right side of our business brains … I’m not anti-data, but a great creative idea has at its core an essential insight. There’s that notion of connecting with people on an emotional level that is so powerful.

“When you think of the power of an ad, what makes you laugh or cry? What’s the return on that? I saw a p&g person speak at a sxsw conference [who said] ‘We look at, ‘Did it make you cry?’ If we just leave it to the machines, it’s going to give us predictable average results.”

“In addition to being one of my favorite members of the bald marketing and advertising contingent, Adam is a rare creative master [and] has the sensibilities of a business tycoon. Forget flashy sizzle reels that mask lack of performance in service of showcasing vacuous creative. Adam delivers work that is fresh, user-focused and drives results. I have been thoroughly impressed with the way he has grown Traction. He is a true digital rock star!”

The agency has twice been named to the Inc. 5000 list of fastest-growing companies in the u.s., registering revenue growth in excess of 35% in 2012.

When asked for one word to describe Kleinberg, it’s “magnanimous,” says his partner-in-crime and executive creative director Theo Fanning.

Fanning shared a story about the agency’s early days as an eight-person shop preparing for its then-biggest pitch ever — to Virgin Mobile.

Every detail was carefully plotted, down to the dress code. The typically casual bunch decided suits and ties were the right thing to wear in New York.

When they got to the client lobby, they found a coat rack littered with suit jackets and ties of various types and a sign: “At Virgin Mobile, we don’t do suits & ties. Hang ‘em up here.”

Rather than give in to despair, without missing a beat, Kleinberg said, “Screw it. We will be the only people in a suit and tie. We will stand out.”

It was true. They were the only people wearing a suit and tie. They did stand out. They won the business. Virgin Mobile is still a client.

1 comment about "Online All Star: Adam Kleinberg".
Check to receive email when comments are posted.
Next story loading

Laurie Petersen is a writer, editor, content strategist and event organizer based in Hoboken, NJ. She is a former executive editor of MediaPost and ADWEEK's Marketing Week.