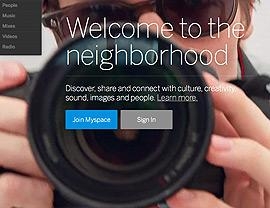 Still a shadow of its former self, Myspace continues to post respectable growth.

Since its latest relaunch in June, the social network saw its audience grow from 24 million to 31 million in its first two weeks out of beta.

Having since grown its audience to about 36 million users, the musically focused platform also says that 70% of its community is now 35 or younger.

Chris Vanderhook -- who, together with brother Tim, bought Myspace in 2011 -- attributes the site's recent success to a focus on content.

As part of its content strategy, the site is aggressively partnering with publishers, artists, and brands to develop various programs, including “CRWN Presented by Myspace,” “Live At The Log Cabin Series,” and “Music Video Collaborations With Artists We Like.”

Vanderhook says the number of artists in Myspace's network has increased 340% since the relaunch, which he said has been fuelled by support from artists like Pharrell Williams, Riff Raff and Killer Mike. The site also continues to secure significant sponsorships, such as its recent Bud Light Music First program, which included online integrations of two live concert series: "Jimmy Kimmel Live!" and Bud Light 50/50/1.

Earlier this year, Chevrolet signed on to support a three-day music event during the South by Southwest festival in Austin. Myspace Secret Shows, so-called, which featured 10 musical performances from artists who were strongly encouraged to share their shows and festival experiences with fans.

News Corp., which bought Myspace for $580 million in 2005, later sold the site to ad network Specific Media and Justin Timberlake for $35 million, in 2011.

Founded in 1999 by brothers Tim, Chris and Russell Vanderhook, Specific Media bills itself as a "global interactive media company." According to documents obtained by Business Insider, last year, Myspace was on pace to lose $43 million in 2012 on revenue of just $15 million. According to estimates from eMarketer, that was down dramatically from about $605 million in revenue in 2008.