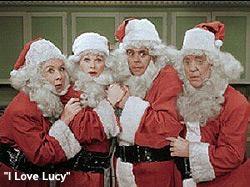 The most interesting news in the television business yesterday had nothing whatsoever to do with any of the new season's new shows or anything happening on cable. Instead, it was CBS' announcement that it was putting together two episodes of a series that first aired in the Fifties and presenting them as a prime-time Christmas special on Friday, December 20.

The two episodes are from the classic comedy “I Love Lucy,” which ran on CBS from 1951-57 and has continued to run in domestic and global syndication ever since. Given the fact that most of the people reading this column weren't even born when “Lucy” reached its series finale, and that many of us can recall dozens of episodes of the show, to assert that it has maintained extraordinary power throughout the more than five decades since it ended is something of an understatement. I really can’t imagine any of the new comedies on television today enjoying that kind of popularity half a century from now.

I’m always somewhat shocked when I meet someone in his or her teens or twenties who confesses to never having watched an episode of “I Love Lucy.” When I get into it with them, the answer usually has something to do with the young person’s lack of interest in watching TV shows that are in black-and-white. So their familiarity with such classics as “Lucy,” “The Twilight Zone” and “The Honeymooners” is grievously limited at best. (Disturbingly, I am acquainted with professional television critics who admit, often with a degree of sheepishness, to never having watched these shows, either. I have even met a few who have never seen “All in the Family,” “The Mary Tyler Moore Show” or “M*A*S*H.” What’s that about?)

Anyway, in addition to taking advantage of their network’s own rich history to provide a holiday treat for “older” viewers, some very smart people at CBS have decided on a way to potentially make these “Lucy” episodes more palatable to a generation that routinely shows no interest in anything that came before it, especially anything in black-and-white. The “Lucy” episodes will be colorized, which will likely agitate purists, but it’s not as if they can’t easily get a more traditional “Lucy” fix in reruns or on DVDs. So to them I preemptively say, lighten up. (CBS, by the way, noted in its press release yesterday that the colorization process would give the episodes a distinctive “vintage” look. Apparently no modern hues will be used.)

The real treat here is the first of the two episodes, titled “The Christmas Episode,” which was first telecast in December 1956 and which, remarkably, many “Lucy” fans (including myself) have never seen. That’s because it wasn’t rebroadcast on CBS during the many years when the network aired “Lucy” repeats during the day, nor was it included in the syndication packages that have kept “I Love Lucy” at the forefront of popular entertainment in the dozens of years that have followed. Perhaps that’s because it’s a holiday flashback episode that was conceived as a special event, in which the Ricardos and the Mertzes reminisce (while decorating a Christmas tree) about the many changes in their lives in the years since Lucy and Ricky’s son Little Ricky was born.

By the way, the flashbacks will not be colorized, which could cause a significant response in younger viewers. Will the sudden jolt of black-and-white repel them? Will they turn away? Will they be confused? Will they seek the comfort of colorful familiarity on any of the many other screens that will likely be within arms’ reach? It’s a Christmas cliffhanger!

The second of the two episodes to be telecast is one of the series’ most famous, “Lucy’s Italian Movie.” It first aired in March 1956 during the season when Lucy and Ricky Ricardo and their friends Fred and Ethel Mertz traveled through Europe. It’s the one that finds them in Rome, where Lucy visits a vineyard and ends up in a memorable scrap involving a vat of grapes.

This is hardly the first time CBS has dipped into its programming vaults to offer special presentations of material from its many classic series. The network has telecast numerous reunion specials and retrospectives during the last twenty years for everything from “I Love Lucy” and “The Carol Burnett Show” to “Dallas” and “Knots Landing.” Indeed, the nostalgia programming that CBS aired in the weeks following 9/11 resonated with viewers and drew giant-sized ratings.

I wonder why every network doesn’t find reasons to periodically celebrate its own past. That would be one more way they could continue to distinguish themselves from the rising tide of attention-grabbing new media alternatives that threaten to engulf them, wouldn’t it?