Why Is 'Homeland' So Disappointing This Season - And Why Are Its Ratings On The Rise? 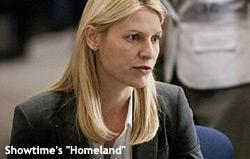 Just when critics and other industry observers think they understand television, a puzzle like the one Showtime’s “Homeland” is at the center of comes along and forces them to re-evaluate basic assumptions about the popularity of quality drama.

To be specific, “Homeland” -- a complex psychodrama/thriller hybrid that distinguished itself in its first season as one of the best dramatic programs in modern television history and reaped numerous rewards as a result -- is this season transforming into something completely new, and not in a good way. If not for the still sublime performances of series lead Claire Danes as bipolar CIA agent Carrie Mathison and invaluable supporting player Mandy Patinkin as her mentor, Saul Berenson, there would be almost nothing to recommend about its wildly uneven third season to date.

And yet, despite its problems, ratings for “Homeland” are once again on the rise (more about that below).

At the top of the complaint list: Nicholas Brody, the terrorist-turned-congressman-turned possible terrorist played by the inimitable Damian Lewis has largely been put out to pasture (actually a bombed-out building in Venezuela) as a perpetually tormented fugitive and hostage in a wholly unpleasant sub-plot that has been a chore to sit through. The only positive note about Brody’s story is that it hasn’t been given very much time -- indeed, he has hardly been in the series this season.

Much of the screen time Lewis used to enjoy seems to have been turned over to Morgan Saylor as Brody’s erratic daughter Dana. A major storyline in season three has been all about Dana’s troubles and her latest self-destructive escapade with a reckless bad boy. Saylor brought so much profound emotional intensity to the first season of the show that it’s easy to understand why the “Homeland” production team wants to continuously play up Dana’s psychological issues, but her story this season, like the one they built for her in Season Two (with the vice president’s snotty son), feels like filler.

There has been a lot written about the big twist two weeks ago at the end of episode four, which revealed that almost everything viewers had been watching for the first few episodes wasn’t what it appeared to be. This was supposed to make for exciting, twisting-turning drama, but for some people it came off as a big cheat. Why did the show devote almost four hours to a story that wasn’t really the story viewers thought they were watching? A surprise of that magnitude might have worked well as a single-episode stunner, or a two-episode build to a shocking payoff (with a breathtaking midpoint cliffhanger). Instead, it has so far amounted to very little.

“Homeland” should be above such stuff, or so I thought throughout its first season. Its second season was certainly more satisfying than its third has been, although seismic problems in its storytelling began to compromise it by the middle of its sophomore year. Actually, cracks in its foundation began forming as early as the second episode of Season Two when Brody texted a terrorist from the CIA situation room to warn him that he was about to be shot. Cell phones would not be allowed in that room, signals would be blocked, calls and texts that were somehow made would be identified and traced, etc., etc. But all of that was casually overlooked simply to move the plot along. “Homeland” didn’t exactly break at that point, but it certainly suffered significant damage as far as its credibility goes, and throughout Season Two it was downhill from there. That said the show managed to remain thrilling and deeply captivating right up to the explosive mass murder at the end of the season, even when dumb things were happening.

But here’s the rub: This season ratings for “Homeland” are on the rise. This is happening despite the egregious narrative problems with the show, and it’s happening in one of the most competitive time periods on television, especially for quality drama. “Homeland” has had to survive opposite CBS’ “The Good Wife,” HBO’s “Boardwalk Empire” and AMC’s “The Walking Dead,” not to mention NFL Football on NBC and most recently, the World Series on Fox. But it’s not just holding its own. It’s growing!

There is no easy explanation for this, except perhaps that people may be binge-watching the first two seasons of “Homeland” and hungrily tuning in this season for more of the same. It ought to be clear to them that they aren’t getting what they hoped for, but that doesn’t seem to be the case. They’re sticking around, the show has been renewed for a fourth season and all appears to be well.

I can’t believe anyone tuning in to “Homeland” for the first time this season would be instantly hooked on the show, but maybe it plays better in its current compromised state with people who weren’t watching when it set an impossibly high bar for itself earlier in its run. Regardless, I certainly wish it well. It’s not the first great show to stumble badly in its second or third season -- a not uncommon circumstance I will never fully understand. And it still spins around Danes’ consistently remarkable performance; one so mesmerizing that it belongs alongside the likes of James Gandolfini and Edie Falco in “The Sopranos” and Bryan Cranston and Aaron Paul in “Breaking Bad.” I’d like to say that Danes alone is reason enough to watch, but “Homeland” has never settled for that level of complacency, so I don’t see why viewers should either.

tv
2 comments about "Why Is 'Homeland' So Disappointing This Season - And Why Are Its Ratings On The Rise?".
Check to receive email when comments are posted.
Read more comments >
Next story loading