Halloween Horrors: Are 'Supernatural,' 'Teen Wolf' And Other Monster Shows Believable In The Digital Age? 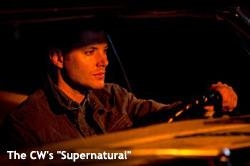 On this Halloween day I have found myself contemplating the strange history of the Stephen King horror story “Carrie.” The novel, published in 1974, was an instant bestseller, and the Brian De Palma movie adaptation starring Sissy Spacek and Piper Laurie that followed in 1976 was a box-office smash. That movie was as perfect a horror film as one could ask for in the mid-Seventies, not simply because its tormented central character learned to use her “gift” of telekinesis to exact violent and bloody revenge against everyone who was making her life a living hell, but because it truly existed in the time that the story was written and the film was produced. The teens in “Carrie” were very much teenagers of the moment; the good kids, the bullies and the outcasts lived in a relatively small world defined by the people in their neighborhood, at their school and at their places of worship. Until they graduated from high school and made decisions about their futures, their lives were what they were, for better or worse.

Among other things, “Carrie” was a story about life as young people experienced it long before cable television, computers, the Internet and digital technology permeated society and converged in such as way as to open the worlds of young people far beyond what had been traditional limitations. While its central themes of bullying and teen angst remain sadly relevant, “Carrie” simply cannot be the same story in a world in which adolescents are empowered by easy access to almost everything they could want or need. Maybe this is the second most obvious reason why the many ill-advised “Carrie” sequels and remakes on television and in the movies have met with universal failure. The most obvious reason would be that one cannot improve on past perfection, no matter what young Hollywood thinks.

I am somewhat surprised that young-skewing networks like The CW or MTV have not developed a “Carrie”-inspired television series, because that seems like an obvious thing to do. It would likely die a fast death, but that sad reality hasn't stopped the development of thousands of ill-advised shows.

Of course, even a bad “Carrie” might fit right in, because horror-themed television series are, to use a dated expression, all the rage. Propelled largely by the outsize promotional support such shows receive at the annual San Diego Comic-Con, and now at a number of additional annual genre conventions around the country, they are popping up everywhere like zombies from the grave. AMC's “The Walking Dead” stands out as the best of the bunch, but consider the rest: HBO's “True Blood,” NBC's “Grimm” and “Dracula,” FX's “American Horror Story,” MTV's “Teen Wolf,” Fox's “Sleepy Hollow,” BBC America's “In the Flesh,” Sundance's “The Returned,” Syfy's “Being Human” and The CW's “Supernatural,” “The Vampire Diaries” and “The Originals.” By this time next year this list will have undoubtedly grown.

Given my feelings about why “Carrie” belongs in the past, it's interesting to consider which of these current horror series exist comfortably in the present and which seem to be faking it as they go along. One of the best in terms of fitting into the moment is “True Blood,” which from the start has told very modern stories of monsters and madness (in an admittedly exaggerated manner) without trying to work around the realities of the world today. Politics and the media have played a part in many of its stories so far, and even if “Blood” has been uneven in recent seasons, it has always been skillful in the way that it has handled the real-life elements of its wholly unreal plot lines.

On the flip side, “The Walking Dead” takes place in a world where everything we know and take for granted has gone away, which allows the story to advance on its own terms. Maybe that's why “Dead” is the most popular of all of these shows. It's simple, straightforward, back-to-basics horror.

Similarly, the second (and best) season of “American Horror Story,” titled “Asylum,” took place in the Sixties, a time when awful things could happen in dark or remote places and nobody would be the wiser. The writers took full advantage of the “limitations” of the period with nerve-frying results.

“Teen Wolf” doesn't really deal with the reality of digitally empowered young people as well as it should, but its young characters are some of the most realistic on television in the way they talk and interact with each other, so I'll give it a pass. (I would argue that Stiles, one of the few characters on the show who is not a supernatural being, is one of the truest teenagers on all of television.)

“The Vampire Diaries,” on the other hand, has felt increasingly disconnected over the years. It's set in the present day, but digital technology does not seem to get in the way of the madness at hand, although the primary characters on the show are teenagers. With all the deaths in Mystic Falls over the years -- especially those of students in and around the high school --  one hard-hitting tweet or Facebook post would bring the cable news networks and countless other media outlets running from every corner of the globe. Given the body count at this point they would probably have established bureaus around the town green.

“Supernatural” is another increasingly unbelievable horror show, not because it features so many nasty angels and deadly demons, but because the world around the heroic Winchester brothers seems rarely to take note of anything they do. Wouldn't the sight of angels raining down from the sky change life as we know it, or the arrival of the apocalypse? How about the dozens (or is it hundreds?) of grisly murders committed by countless deadly beings through the years before the Winchesters stopped them? Wouldn't the media run wild with such stuff?

Yes, the Winchester brothers research demons online (though I preferred when their now-deceased pal Bobby used to look up baddies in dusty old books). And the guys keep in touch with other “hunters” over the ‘net. And many of their battles against various bad things happen in relatively remote locales. But the show still feels somewhat out of sync with the times, as if its stories are being told by old people who grew up before digital technology made certain forms of storytelling more difficult.

The writers of “Supernatural” used to know better. The show never felt as contemporary as it did several seasons back when a band of video-camera-wielding nerds with visions of reality television grandeur known as the Ghostfacers kept interfering with Sam and Dean's efforts to fight demons. They even had their own Web series. I wonder whatever became of those guys.
tv
Next story loading