Millennial Moms Having Better Sex Because Of Mobile? 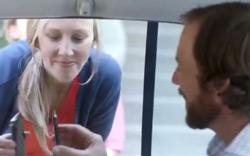 And the first wag who makes a “vibrate mode” crack is not permitted to read further.

Meredith, those Better Homes & Gardens folks who also publish Parents, American Baby and Family Fun magazines and sites apparently are trolling for some hip cred in this latest survey. As our own headline here shows shamelessly, we will both take the blogger bait and use it ourselves. The claim is that the new generation of moms (20-somethings to 40-somethings) -- totally wired yet untethered -- are finding better sex by virtue of the new technology. Well, I am not sure the actual metrics make the case very convincingly, but let's play along, shall we? In this third “Millennial Moms & Media” of 1100 moms (with kids ages 0-12) it turns out that only 21% of them actually say that their phone or tablet device has improved their sex life.

So I wouldn't call that a resounding huzzah for the sexual breakthrough that is mobile.

What is more revealing and intriguing is how the phone has become a huge flirtation channel for couples. Remember the Samsung Galaxy ad series that showed Dad leaving for a business trip? Mom taps his phone to transfer a fun video of the kids to his smartphone. Out of the kids' earshot she taps his phone a second time but warns that he might not want to watch that one on the plane. Apparently Samsung must have done some homework there. Meredith found that 41% of these moms have indeed sent at least a sexy photo of themselves to their partners. And more than half (57%) send flirtatious texts.

This has a downside, because 13% admit to sending a racy photo of themselves to the wrong person. And that could get troublesome, because there is a bit of stealth extramarital activity going on as well. About a quarter of moms say they have connected with a former love interest through social media.