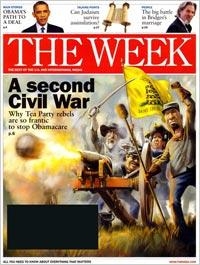 Dennis Publishing’s The Week is defying the general downward trend in print magazines with plans to increase its frequency to 51 issues in 2014, up from 48 this year. The move comes two months after Tim Koorbusch replaced Michael Wolfe as the publisher of The Week.

The reasoning behind the decision, according to Ad Age, which first reported the news. seems simple enough. The trade mag quoted Steven Kotok, CEO of The Week and Mental Floss magazine, as saying: “Each one of our issues is profitable. If we add more issues, we're more profitable.” Kotok noted that The Week’s business model relies mostly on circulation revenues, which contribute 65% of total revenues, making it less susceptible to the ongoing secular decline in print advertising.

Time Inc. has landed its first advertising client for Watercooler Live, a native ad product that combines advertiser content and Time Inc.’s editorial content in microsites and ad units, according to Adweek. Land Rover is using the new native ad product to create a microsite and ad units with custom content from the carmaker and Time Inc. editorial content.

Christina Bellantoni has been named editor in chief of CQ Roll Call, owner Economist Group announced. She is returning to CQ Roll Call after two years serving as political editor at the PBS Newshour. She previously served as associate politics editor at Roll Call during the 2010 midterm elections. In addition to overseeing all editorial print and digital platforms for Roll Call, as EIC Bellantoni will also write a blog and represent the publication on television and at live events.

Deirdre Finnegan has been named publisher of Meredith Corp.’s EatingWell, with responsibility for overseeing all advertising for the magazine, which is devoted to healthy eating. Finnegan previously served as associate publisher for Coastal Living. She also served as advertising director and associate publisher for Cottage Living magazine, New York manager for Southern Living and vice president for media agency Hill, Hollliday/Altschiller