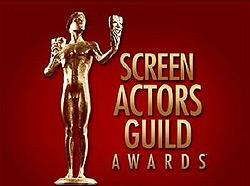 Is there any point in complaining about oversights and exclusions from the television categories in this year’s Screen Actors Guild Award nominations? After all, unlike any of the many other award shows set to cascade our way in the months ahead, the SAGs are all about actors honoring their peers, first with nominations and then with specific awards. Can those of us who are not actors -- who are not members of the Hollywood acting community -- really insist that when it comes to giving special recognition to actors we know better than they do?

Of course we can! And we will. With all due respect to the nominees, most of whom deserve their moments in the spotlight, members of the Screen Actors Guild need to sharpen their focus -- or at least start watching more television.

It will come as no surprise to regular readers of this column that I think the most egregious oversight among this year’s SAG nominations, which were announced earlier this morning, is the exclusion of the cast of CBS’ “The Good Wife” from every category. This is a stunner, given the extraordinary season the show is having -- especially as a showcase for its veteran cast members, every one of whom has repeatedly been given fascinating new challenges. I would have thought “The Good Wife” would be front and center on SAG’s radar not simply because of its magnificent primary cast but because it consistently provides extraordinary work for dozens of recurring players and guest stars.

Curiously, SAG members also didn’t show any love for Netflix’s “Orange is the New Black,” which many critics thought was a lock for a nomination in the category of Outstanding Performance by an Ensemble in a Drama Series, if nothing else.

I’m at a loss to explain the exclusion of Julianna Margulies from the category of Outstanding Performance by a Female Actor in a Drama Series. I’m even more stunned that the awe-inspiring Tatiana Maslany of BBC America’s “Orphan Black” was excluded after giving the performances of the year as multiple clones of the same woman, each with a distinctive personality and substantial plotline of her own. I enjoy Kerry Washington’s work on ABC’s “Scandal” as much as anyone else, but is it truly superior to what Margulies has been asked to do this season, or to what Maslany accomplished in the first season of her series?

Given her performance in FX’s “Sons of Anarchy” this season an argument can be made that Katey Sagal also belongs on that list -- although, in fairness to SAG members, they hadn’t seen last night’s gut-wrenching “Sons” season finale when they filled out their ballots. Sagal was, in a word, memorable, especially during that murder scene, the most upsetting thing I’ve seen on television since the infamous Red Wedding on HBO’s “Game of Thrones.”

I’m thinking that Lizzy Kaplan and Allison Janney of Showtime’s “Masters of Sex,” Emmy Rossum of Showtime’s “Shameless” or Vera Farmiga of A&E’s “Bates Motel” should have made the cut, or Monica Potter of NBC’s “Parenthood.” (The acting categories in the SAG Awards combine lead and supporting players.) But what’s the point? Claire Danes of Showtime’s “Homeland” will probably win anyway, and she deserves to, especially after this wildly uneven season of her show. Her blistering performance holds it together through good times and bad.

Over in the category of Outstanding Performance by a Male Actor in a Drama Series, I think Josh Charles of “The Good Wife,” Jon Hamm of AMC’s “Mad Men,” Aaron Paul of AMC’s “Breaking Bad,” Timothy Olyphant of FX’s “Justified,” Michael Sheen of “Masters of Sex” and Michael Cudlitz of TNT’s “Southland” were all more deserving of nods than at least two of the men who were nominated. I’m surprised their fellow actors don’t agree.

Lastly, the inclusion of Rob Lowe for his sturdy but somewhat forgettable portrayal of President John F. Kennedy in National Geographic Channel’s “Killing Kennedy” may be the most mysterious SAG nomination of all.

Here are the nominees in the television categories for this year’s SAG Awards.

Outstanding Performance by a Male Actor in a Drama Series

Outstanding Performance by a Female Actor in a Drama Series

Outstanding Performance by an Ensemble in a Drama Series

Outstanding Performance by a Male Actor in a Comedy Series

Outstanding Performance by a Female Actor in a Comedy Series

Outstanding Performance by an Ensemble in a Comedy Series

Matt Damon – “Behind the Candelabra” (HBO)

Michael Douglas – “Behind the Candelabra” (HBO)