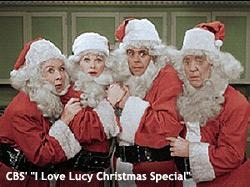 Two months ago I wrote with some excitement about a special holiday program CBS is running tomorrow night: The “I Love Lucy Christmas Special,” comprised of two colorized episodes of the classic series that ended its prime-time run almost 60 years ago and remains the most popular television series in the history of the medium.

Despite those accolades, Friday's prime-time telecast of “I Love Lucy” will likely be the show's first exposure to potentially millions of millennials who startlingly have never seen an episode of this still-delightful series. How can that be, one might ask? Consider two sad truths. First, children born to the last wave of the baby boomers as well as to the Me Generation of the Seventies have little interest in what the world had to offer before they came along. (I'll leave it to “experts” to explain why today’s young people think time began when they did.) Second, no matter how many screens they are hooked on, kids tend to turn away from moving images of any kind that are delivered in black-and-white. (Experts aren't required to validate this statement. Just ask any kid you know.)

So in the interest of perhaps attracting young people to two ancient episodes of “I Love Lucy,” CBS has made the interesting decision to offer colorized versions of both. Happily, the colors used are vintage tones; that is, colors that were commonly seen in fashion and household décor in the Fifties but are not so prevalent today. You won't see the color of Lucille Ball's hair in the world around you or the color of the onesie Little Ricky is wearing in the first of the two episodes. (For a real treat in retro color catch reruns of the wacky Sixties country comedy “Green Acres” on Me-TV or Antenna TV. The rich colors on vivid display are so mesmerizing as to be alien -- and almost non-existent in the bland color palate of today's decorators and designers.)

Anyone who watched “I Love Lucy” when it was first on, or who grew up with it in syndication (which is most of us), likely needs little prodding to tune in tomorrow night and enjoy this special, which isn't so much a blast from the past as a gentle touch of sweet nostalgia. The first episode, originally titled “The I Love Lucy Christmas Show” when it was first telecast on December 24, 1956, finds Lucy and Ricky Ricardo and their neighbors Fred and Ethel Mertz reminiscing about past events in their lives while decorating the Ricardos' tree. It's a real treat, as it's filled with flashbacks to memorable scenes from earlier “I Love Lucy” episodes, including the heartwarming sequence at the Tropicana nightclub in which Lucy told Ricky she was pregnant (without using that word, which was taboo on TV back then) and the chaos that accompanied the birth of Little Ricky. The scenes in which the tree is being decorated are colorized. The flashbacks are in their original black-and-white.

There is a memorably bizarre moment at the end of the episode when Santa Claus appears in the Ricardo kitchen. Even loyal “Lucy” fans may not realize that this same Santa (played by two different actors) actually popped up in earlier seasons at the end of several episodes that had their original telecasts in the month of December. (I don't recall any of these Santa scenes. They probably were cut from the syndicated episodes to accommodate expanding commercial breaks.) According to The Lucy Book by Geoffrey Mark Feldman, which was endorsed by Lucie Arnaz and Desi Arnaz Jr., the children of Lucille Ball and Desi Arnaz, this episode was never thought of as an actual Christmas special. It was simply another episode of “I Love Lucy” that was cut from syndication packages out of concern that people wouldn't want to watch a Christmas-themed show at other times of the year. CBS ran it twice after Lucille Ball's death in 1989, once in its original black-and-white version and once in a colorized version. At that time it had not been seen since 1956.

Lucille Ball in The Lucy Book is quoted as saying about the episode, “There is something eerie and spooky about this show. I don't know what it is, but it makes me a little nervous and I do not enjoy watching it.”

The second episode in the special is “Lucy’s Italian Movie,” and it contains one of the series' funniest and most popular sequences: Lucy's visit to a vineyard in Rome, which ends with her tussling with a local woman in a vat of grapes. Ball in The Lucy Book is quoted as saying, “Stepping on those grapes was like stepping on eyeballs. That woman in the vat with me didn't understand what was going on and she took the fight seriously. She took me down and held my head under the squashed grape juice. She was like a wrestler. I almost drowned!”

As I wrote two months ago, wouldn't it be great if all the broadcast networks periodically opened their vaults and figured out ways to occasionally present popular episodes from series of their pasts -- especially during the holiday season?

tv
1 comment about "Insider Info About CBS' 'I Love Lucy Christmas Special'".
Check to receive email when comments are posted.
Next story loading