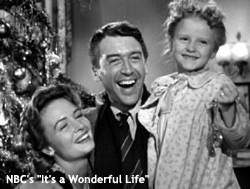 NBC tonight has scheduled a Christmas Eve telecast of the 1946 Frank Capra classic “It's a Wonderful Life.” It has been a tradition at NBC since 1994 to run this beloved film at least once during the Christmas season, often on Christmas Eve or Christmas night itself. Tonight's presentation will be the 36th prime-time run of “Life” on the network!

You have to admire NBC's sustained interest in and support of this movie, which many film historians have designated as the best Christmas movie ever made. That's a somewhat sorry observation, in that it indicates Hollywood hasn't turned out as wonderful a Christmas movie in the more than six decades since “Life” was released in theaters.

Of course, many people would argue that Bob Clark's 1983 feature “A Christmas Story” is the most wonderful Christmas movie of all time. I'm not going to argue that point: I tend to leave TBS on for a few hours at some point on Christmas Eve or Christmas Day to enjoy parts of the movie, albeit in bits and pieces and out of order. TBS makes it easy with its annual 24-hour “Story” marathon, which begins at 8 p.m. tonight.

But that's cable, where anything goes. Over in the much more rigid world of broadcast it's a real treat for a network to schedule even one presentation of a movie of any kind and promote it as a special event.

Those of us who recall a television landscape populated primarily by the Big Three broadcast networks know that movies used to be a huge part of their schedules, even when edited and broken up to accommodate commercials. Movies are now primarily confined to basic and pay cable networks, where they function as the foundation of whatever networks they rotate on, but are rarely considered programming events. Indeed, most of the big events on basic and pay cable networks these days have to do with their original series. Conversely, even though original series dominate broadcast schedules, individual episodes of those shows rarely achieve true event status.

Of course, nothing comes close to the excitement of CBS’ annual telecast decades ago of “The Wizard of Oz,” which every year all but stopped society in its tracks. But that’s ancient history.

I think viewers would welcome additional special presentations of classic films on broadcast television around the holidays or as an alternative to the instantly forgettable fare that often fills their Saturday night schedules. I also think such movies provide a terrific environment for advertisers, especially those who approach sponsorship of such events in creative ways. Surely that lesson was learned during NBC’s recent telecasts of “The Sound of Music Live!”

Speaking of “The Sound of Music” -- a movie worthy of event designation if ever there was one -- I would be remiss if I didn’t note that ABC still runs the 1965 classic from time to time, though ABC Family tends to run it more frequently. Indeed, ABC ran it two nights ago, on Sunday, where its audience was up versus its Christmas season telecast last year.