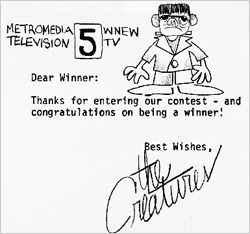 Some of the most popular columns this holiday season in the TV Blog have been nostalgic in nature, focusing on such annual broadcast treats as “Rudolph the Red-Nosed Reindeer” on CBS and “It’s a Wonderful Life” on NBC and CBS’s presentation this year of the “I Love Lucy Christmas Special.”

So in the spirit of that recent warm reception to retro-media and with a mind to one of the issues that has been at the forefront of the television business in 2013 – the increase in on-screen graphic distraction that has come about with the addition of hashtags and tweets to screens already cluttered by network logos, show titles and intrusive reminders of upcoming programs – I thought it fitting that I end the year with a look back at a relevant television memory from my childhood.

I couldn’t have known it at the time, but my experience with a local TV station in the tri-state area contributed to clutter during commercial pods. It was also my first experience with interactive television, albeit in its innocent infancy.

In New York City in the late Sixties and early Seventies local station WNEW (now Fox’s official NYC affiliate WNYW) ran old monster movies on Saturday nights. The franchise was titled “Creature Features.” In an effort to engage the audience, viewers were invited to send in humorous comments about their favorite monsters. Someone at WNEW selected the best entries, which would then appear on screen in ad breaks during “Creature Features” telecasts. This was a great way to encourage people to not only watch every week but to stay put and pay attention during commercials.

After weeks of watching clever jokes about Frankenstein, Dracula and the like I decided to enter a humorous comment of my own. I wrote “The Werewolf of London gets lost in the fog” along with my name and address on the back of a blank postcard and mailed it to WNEW. (I chose a lesser known monster because I figured the Werewolf of London wasn’t as well known as Frankenstein, Dracula or The Wolfman and would therefore generate fewer competitive entries.) Several weeks later when “The Werewolf of London” cycled through “Creature Features” I assembled my friends in front of our old black and white TV to watch and see if my quote was selected. (There was no advance notice given by WNEW. Anyone who entered had to patiently wait to see if his or her quote was used and more importantly watch every minute of every movie -- including the commercials -- that featured a monster he or she had sent in a joke about.

I remember the thrill of seeing my joke appear on screen that Saturday night with my name and hometown underneath. I also remember my friends and I watching each and every commercial during each and every break for fear that we might miss my quote. In fact, we watched every commercial in every week’s movie just to read the two or three jokes that were included in each telecast.

I later received a card from the “creatures” at WNEW, which is pictured above, and a complimentary Aurora monster-model kit of The Wolfman. Aurora kits were the prize WNEW sent if one’s quote was selected.

So, you see, I have known since childhood that there is value to be had if a television network or station effectively encourages viewers to comment on their programming and rewards certain of those viewers with on-screen representation. Back then it was careful, and controlled, and it made a big impact. I have also known since I was very young that it isn’t difficult to get viewers to watch commercials as long as you reward them for it in some way.