'The Vampire Diaries' Makes The Most Of Its 100th Episode 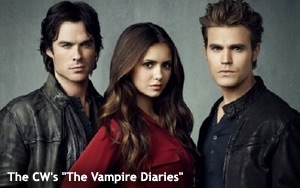 Is “The Vampire Diaries” getting long in the fang? The 100th episode, to be telecast on January 23, suggests the dead are still very much alive, if somewhat starved for new blood. I have more to say about that later in this column.

Reaching the 100th episode of any television series is always a cause for celebration. It generally means the show is ready for syndication, which used to be where most shows made most of their money. Traditional syndication may not pay the giant money it used to, but today there are plenty of aftermarket platforms to take up the slack.

Hitting the big 100 also means that a show has proven to be popular and/or lucrative enough for a network to have kept it around for at least five seasons. (Four seasons aren't enough anymore, because most shows no longer have single-season orders of 25 or more episodes. They come up a bit short after four, but once that fifth season renewal comes in the good times begin.) In terms of ratings, at least on certain networks, the bar is set so low these days that a show has to be really terrible not to hit that magic number.

As such, it seems that every time one examines a network schedule one finds yet another show that has reached 100 episodes. This week that honor goes to The CW's “The Vampire Diaries,” which marks this milestone on Thursday night. More often than not, at least where dramas are concerned, the 100th episode is just another installment in an ongoing story. But that isn't the case here. Executive Producer Julie Plec and her team have delivered an episode that should delight anyone who has watched the show from the start or jumped on board at any time since then. It is filled with all kinds of special surprises and the returns of a number of characters from seasons past, the names of which will not be revealed here. More importantly, it's the kind of hour that acknowledges its audience, thanks its viewers and respects its storytelling to date.

In short, the 100th episode of “The Vampire Diaries” reinforces everything that is good about the television viewing experience. It doesn't simply strengthen the franchise or its network. It also supports and fortifies the entire medium of broadcast television, in effect reminding people that staying with a broadcast series for the long haul can result in rewards that are simply not possible in other medium. Pay and basic cable series can do this too, but remember that the viewer's commitment to a broadcast program with its 22 or more episodes per season arguably makes for stronger bonds -- and because of the time involved, can build stronger emotional connections. That is beneficial to the advertisers that support such shows, too.

Now let me spoil all this happy talk about the 100th episode of “The Vampire Diaries” without actually revealing any spoilers, which won't be easy to do. Most of the hour is simply grand, with so many unexpected occurrences and so many surprise returns that it reminded me over and over why I liked the series so much during its first few seasons and why it became the hugely popular series that it is.

And then in its final moments it does that thing broadcast shows like this one always do, undercutting the forward momentum the episode established and once again creating the feeling that the mythology is simply going around in circles in hopes of reaching 100 or now perhaps 200 episodes.

I'm reasonably certain that if “The Vampire Diaries” were a cable series or a British series, this critical episode would not have ended the way it does. It's not that the final sequence is poorly written or executed. It is actually very well done. But it ends with one of those “shocking surprises” one sees coming from a mile off, especially on broadcast shows. In this case one may have convinced oneself that “Vampire Diaries” was daring to be different and was going to build on its own past while also leaving it behind (like “The Good Wife” did a few months ago). I had certainly done so, and I was impressed with what I thought the show was going to do. And then it got all predictable again.

This is supposed to be the Age of Risk, especially in dramatic television. How I wish this show were on AMC or FX.