Why Does Jay Leno's Departure From 'The Tonight Show' Feel Like A Non-Event? 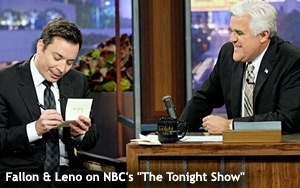 Tomorrow night will bring with it the final installment of “The Tonight Show With Jay Leno.” NBC’s late-night hours will then be filled with news reports and coverage of the Winter Olympic Games until February 17, when “Tonight” becomes something else entirely with new host Jimmy Fallon and a return to New York City after being telecast from Burbank for more than 40 years.

It’s not the end of “Tonight” -- even if it is the end of the show as we currently know it. But it’s the end of late-night dominance by Jay Leno, who in many of the interviews he has done in recent days about his imminent departure from “Tonight” has made clear he has no interest in returning to the post-prime-time arena on any other network or media service.

The excitement about Fallon moving to “Tonight” (and Seth Meyers moving into the “Late Night” franchise) hasn’t fully kicked in, perhaps because NBC is all about the Olympics these days. It might have been more of an event had Leno left on a Friday and Fallon begun on a Monday, rather than having a prolonged gap in between. Indeed, Fallon’s appearance on “Tonight” on Monday for an informal passing of the baton resulted in the show’s highest overnight rating and its strongest local market rating for any night of the week since March 2010. That’s great promotion for Fallon’s move, but one might say it comes two weeks too early.

I’m a big fan of Fallon’s, and I’m glad I will no longer have to stay up too late to see what he’s up to every night. I’m sure he will bring the same outsize creative energy and infectious enthusiasm to “Tonight” that he so winningly developed on “Late Night."

But I can’t help but wonder why I’m not more wistful (if that’s the right word) about the end of Leno’s run as the host of “Tonight.” After all, he’s been there for 22 years (with the exception of seven very unfortunate months when he hosted NBC’s prime-time fiasco “The Jay Leno Show” in late 2009 and early 2010). That’s only eight years shy of the legendary Johnny Carson’s historic run. And before that he was Carson’s permanent guest host for many years. Furthermore, for most of Leno’s time on “Tonight” it has remained the No. 1 late night show.

I was moved by Carson’s departure, as were millions of Americans who had either enjoyed him during much of their adulthood or, like many of us, grown up watching him. I was even caught up in David Letterman’s move from NBC to CBS is 1993. But Leno’s exit doesn’t seem to be having any effect on me at all -- although it does have me thinking about something I never gave much thought to: Why was the show titled “The Tonight Show With Jay Leno”? When Carson was host it was known as “The Tonight Show Starring Johnny Carson.” With Fallon as host it will be named “The Tonight Show Starring Jimmy Fallon.” Why didn’t Leno rate a “starring” rather than a “with”?

Perhaps the fact that I don’t seem to care very much about Leno’s departure has something to do with the fact that he left once before, when he was rather rudely bounced from “Tonight” in 2009 (having famously been given five years notice) to make room for Conan O’Brien, who flopped in that gig, necessitating Leno’s swift return. Maybe it’s because I’m excited about the “Tonight Show” returning to New York City. Maybe I’m just ready to enjoy the further evolution of Jimmy Fallon.

None of that explains why I seem not to have an emotional connection of any kind to Leno or to the show he has fashioned for more than 20 years. Perhaps it’s just a function of living in today’s ever-expanding media landscape, when the end of any ongoing franchise, no matter how beloved or how faithfully viewed, is quickly forgotten as dozens of alternatives on multiple platforms instantly vie for one’s time and attention. I’ll admit that, unlike when I watched Carson, I was usually multitasking while watching Leno.

I’m already on the record with my beliefs that it would be foolish of NBC to let Leno leave the network altogether and that he would make a grand host for a one-hour, once-a-week prime-time talk and comedy show -- one that would have to be much more thoughtfully designed and executed than “The Jay Leno Show.” The model NBC ought to keep in mind is the BBC’s “The Graham Norton Show,” seen here on BBC America. I also believe that if NBC doesn’t try something like that with Leno that CBS or ABC or a cable network should.

tv
4 comments about "Why Does Jay Leno's Departure From 'The Tonight Show' Feel Like A Non-Event?".
Check to receive email when comments are posted.
Read more comments >
Next story loading