The Next Huge Television Hit Will Be ... 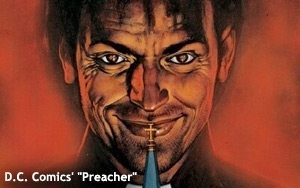 There’s nothing wrong with a little good-natured prognostication as long as it’s based on personal research. And so, because I read the original source material way back in the Nineties and found it remarkable and unforgettable in the very best ways, I’m comfortable predicting that “Preacher” -- a series being developed by AMC and Sony Pictures Television that is based on the comic book of the same name -- will be AMC’s next “Walking Dead.”

Of course, if “Preacher” gets screwed up along the way -- a not uncommon occurrence in television development -- then all bets are off. But for now I’m going to assume that AMC will oversee this project in the same careful way that it has nurtured its ongoing story about the survivors of a certain zombie apocalypse that has captivated the young adult television audience for several years.

I learned long ago that it is premature to get excited about any projects in development, because most of them tend to fall apart before they are completed, or to produce disappointing pilots, or to produce sensational pilots that are followed by disappointing second and third episodes that kill them dead. But “Preacher” is something special. The comic book on which it is based is a bit more complex and far-reaching than the “Walking Dead” series, but it is a work of outsize imagination that is simultaneously epic and intimate, with vivid characters and gripping story lines that should prove captivating to millions of young adult viewers, especially those who embrace edgy and controversial material.

In brief, “Preacher” -- published by the D.C. Comics imprint Vertigo -- chronicles a cross-country journey taken by Jesse Custer, a small-town Texas preacher suffering a crisis of faith who is possessed by Genesis, a creature that is the offspring of an angel and a demon; Jesse’s gun-for-hire ex-girlfriend Tulip, and an alcohol-abusing vampire named Cassidy. Jesse’s intent is to locate God and have it out with Him. For much of the story they are pursued by members of The Grail, an organization that secretly holds power over governments around the world and claims to be controlling the bloodline of Jesus Christ. In subplots, God has abandoned heaven, a distraught young man fails in his suicide attempt and becomes a terrifically disfigured rising rock star accurately known as Arseface, and Jesse is hunted by an Angel of Death known as the Saint of Killers.

“Preacher” was created by Garth Ennis, who wrote all 75 issues (including special short-run spinoffs), and artist Steve Dillon, who illustrated the entire series. To say this could be the most controversial television series ever produced is to make a profound understatement. I can already hear a low rumble in the distance. Interestingly, Ennis followed up “Preacher” with a similarly shocking and even more outrageous comic book titled “The Boys,” about the government’s failing efforts to control out-of-control superheroes. I’ve heard rumors that it is under consideration at a pay cable network. I can’t imagine it working on basic cable, given the unrelenting nature of its adult content and its expansive cinematic qualities. But if a pay cable network doesn’t nail it, then Netflix should get on it right away.

An adaptation of “Preacher” won’t necessarily be as easy a sell as “The Walking Dead” because it completed its run back in 2000. The same depth of content and opportunities for narrative expansion are there, but it isn’t exactly top of mind among younger genre fans because it hasn’t been very visible in recent years. The right marketing campaign targeting comic book stores and relevant social media groups, plus the requisite promotional activity at Comic-Con, should take care of that.

Why such interest in this franchise? First, it’s a very specific property that might not have been easily transferred to television were it not for the success of shows like “The Walking Dead” and HBO’s “Game of Thrones,” two franchises filled with brutal ultra-violence and shocking adult themes that at one time must have appeared unworkable as potential television series. Second, it’s the first project announced by AMC since “The Walking Dead” -- other than the “Walking Dead” spinoff, details about which remain unknown -- that looks to have been chosen with the same audience and marketing opportunities in mind.

Given the strength of “The Walking Dead” -- which now surpasses among adults 18-49, not only every other series on television but NFL games and the Olympics as well, and the unbridled passion of its fan base, which stays loyal to the show and continues to grow even when critics and certain fan groups complain about particular story lines -- any program with the true potential to enjoy similar success deserves the industry’s attention right from the start. As alternative media continue to expand, television is said to be in decline, at least as far as ratings for ongoing series are concerned. But “The Walking Dead” continues to demonstrate otherwise. “Preacher” has the potential to do the same.