Will A Bold 'Dallas' Promotional Stunt Pump New Energy Into The Saga Of The Ewings? 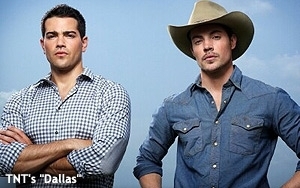 TNT earlier today announced a major promotion on behalf of “Dallas,” which will return for its third season on February 24 at 9 p.m. The campaign is definitely centered on something different: The conversion of an existing gas station somewhere in the country into a flagship station for Ewing Energies, the global energy supply company formerly known in “Dallas” legend as Ewing Oil.

In a move that is likely to propel awareness of this campaign beyond the norm, the Ewing Energies station will undercut the pricing (while supplies last) at competing gas outlets in the area. Presumably, this station -- the location of which will be announced at 8 a.m. ET on February 24 -- will be highly visible not only to passersby but to major media. In other words, expect it to be located somewhere in the greater New York or Los Angeles areas.

Think of the footage to be shot if mobs of people descend on the Ewing Energies station to buy less expensive gas. After all, as we have learned over the last 40 years, a gas mob can form faster than a flash mob if there is money to be saved. I can’t recall the number of times I have had difficulties entering the parking lot at my local Costco simply because dozens of cars were waiting to buy Costco gas, which is only a few cents cheaper per gallon than gas at nearby stations.

Conceived and executed by Grey New York, the “Dallas” campaign will be supported by radio promotions, billboards, video messages on Facebook by John Ross Ewing (son of the late J.R. and now a force to be reckoned with in the family business), wrapped oil tankers and more.

It’s all very exciting, but I have to wonder if any of this will drive new viewers to the show itself. “Dallas” faces a monumental task this season, in that it must prove (for the first time since the franchise began in 1978) that the machinations of the Ewing and Barnes families are worth following even without the late Larry Hagman’s J.R. in the mix. That’s an especially tough challenge, given that J.R. remains one of the most popular and vividly realized characters in the history of television.

Concerns about the loss of J.R. aside, “Dallas” has other obstacles to overcome -- mainly an absolute lack of dramatic energy except when franchise veterans Patrick Duffy and Linda Gray and recurring guest actress Judith Light are on the screen. The other “older” actors simply aren’t very dynamic, although in their defense they aren’t given very interesting material to work with. Meanwhile, the “younger” actors on the show, while generally a very sexy group, have no real chemistry with each other, sexual or otherwise. Maybe the addition of AnnaLynne McCord to the cast will change that.

When that still-thrilling “Dallas” theme song blasts forth at the beginning of every episode, those of us who enjoyed the original series still sit up and take notice. (Like all great TV theme songs, it seems to say, “You’re leaving your own life behind for a while and entering our world. Get ready for the ride.”) But week after week the same thing happens: The show doesn’t live up to the promise of the music. It’s a perpetual anticlimax.

Other than Duffy and Gray (still one of the most beautiful and intriguing actresses on television) “Dallas” doesn’t even handle its vets right. Ken Kercheval is around as the still vengeful Cliff Barnes, but the character remains a bit of a nincompoop. There hasn’t been any maturity there. Charlene Tilton and Steve Kanaly pop in and out as Lucy Ewing and Ray Krebbs, but they’re just window dressing. Ted Shackelford and Joan Van Ark, as Gary and Valene Ewing, made the most of their brief guest appearances last season, but they were oddly marginalized. (Van Ark was on fire when Valene had it out with Sue Ellen.) Why aren’t they around more often? Audrey Landers as Cliff’s ex-wife Afton Cooper, Debra Shelton as J.R.’s ex-mistress Mandy Winger and Cathy Podewell as J.R.’s ex-wife Callie Harper Ewing have also passed through to little effect.

In short, it seems to me that the “Dallas” writers are having difficulty writing for all of their characters, regardless of whether they are newcomers or veterans or if they are series regulars or guest stars. All the dressed-up gas stations Grey New York can activate aren’t going to change that. Maybe they need a colorful new character or two to come in and stimulate writers, characters and actors alike. Through the first ten of its original thirteen seasons “Dallas” never had difficulty refreshing itself; and even when it was gasping its last Hagman somehow managed to keep it all alive.

I’m rooting for “Dallas” to recharge itself and deliver the big, bold trashy drama that made it one of the most successful franchises in the history of the medium. (Basic cable is much looser today than broadcast used to be, so what’s the problem?) A red-hot “Dallas” might pave the way for reboots of other Eighties primetime soap favorites like “Dynasty” and “Falcon Crest.” What are Alexis Morell Carrington Colby Dexter Rowan and Richard Channing up to these days, anyway? How has the Internet changed their lives? The possibilities are tantalizing.

tv
2 comments about "Will A Bold 'Dallas' Promotional Stunt Pump New Energy Into The Saga Of The Ewings?".
Check to receive email when comments are posted.
Read more comments >
Next story loading