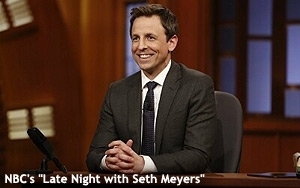 First nights are typically the worst nights for comedians who become hosts of late-night talk shows. Remember how awkward Jimmy Fallon was when he first appeared on NBC’s “Late Night” stage? Or the train wreck that was Conan O’Brien when he inherited the same show from David Letterman back in 1993? O’Brien wasn’t very good during his first few nights on NBC’s “Tonight Show,” either. Indeed, I seem to recall Jay Leno being a bit of a bore when became host of “Tonight.” It took him a year to figure out what he was doing wrong and make it right.

Interestingly, former “Saturday Night Live” news reader Seth Meyers last night seemed right at home right out of the gate as the new host of “Late Night.” He smiled an awful lot, which may have been an involuntary expression of nervousness, but who can be sure? (If that’s a nervous tic, it’s a good one for the host of a late-night talk show to have.) In every other respect he didn’t seem unsure of himself at all, which is a real rarity for television first-nighters.

Meyers’ monologue wasn’t the best, but it worked nicely at times and he wisely kept it brief. As soon as he got behind his desk, where he is clearly most comfortable, he seemed like a man happily settling in for the long haul.

My first impression of Meyers’ new gig: Why couldn’t the show open every night with him seated behind his desk (as it did last night, but only so he could write a thank you note to Jimmy Fallon)? He could get right into comments and jokes about the news of the day. It might feel a little “Weekend Update-y,” but would that be so bad? At least it would be something different. He actually did something like that later in the show with a clip-filled Olympic Wrap-Up and was more engaging than he had been standing on the “Late Night” stage.

He also worked well with his old “SNL” pal Amy Poehler, his first guest. I was happy to see her stick around for Vice President Joe Biden’s appearance later in the hour. As BBC America’s Graham Norton and Bravo’s Andy Cohen have shown us, having multiple guests on a talk show at the same time and letting them interact with each other makes everything better.

Meyers’ best moment last night was when he stopped with the standard issue jokes -- which were more edgy and topical than anything Jimmy Fallon gets into -- and from the relative safety of his desk, told a very funny story about a recent romantic weekend with his wife in Connecticut that ended in humiliating fashion, with him holding their tiny dog and helplessly watching another man effortlessly change a flat tire on their car. It reminded me of the kinds of stories Kelly Ripa and Michael Strahan often tell on their chatty morning talk show “Live with Kelly and Michael,” and that got me to thinking how refreshing it would be to have personalities like Ripa and Strahan in late night, or for someone like Meyers to have weekly co-hosts of the opposite sex just to keep things interesting. How great would it have been if Poehler stuck around all week?

These musings speak to a larger matter. I was prepared to dismiss Meyers on “Late Night,” largely because I feel as though I’ve had enough of middle-aged straight white men in business suits entertaining me in my final waking moments of the day (or at any time of day, actually). Is there not a woman or person of any other color who could do the job? Is this some kind of fretful obstacle that broadcast executives have put in place to minimize what they perceive to be a risk of some kind? Why is daytime television so far out ahead of late-night in this regard?

Why are Andy Cohen and Chelsea Handler confined to post-prime fringe on no-budget basic cable networks? Why is Arsenio Hall once again in syndication? The greater issues behind these very valid questions have been talked about for years, but in broadcast’s late-night hours nothing ever changes.

That’s not Meyers’ fault, of course, nor any of the other funny men who have worked long and hard to earn late-night shows of their own, not simply on broadcast but also on Comedy Central and TBS. It’s not as though any of them should have turned down opportunities that came their way. But it’s nevertheless a thing, as they say in the media -- and it’s an unfortunate thing at that.

tv
1 comment about "Seth Meyers Winningly Settles Right In To The Late-Night Boys' Club ".
Check to receive email when comments are posted.
Next story loading