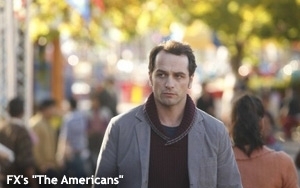 There are few things as exciting in television as watching a drama series that was very good in its first season instantly become something great at the start of its second. That's the case with FX's Cold War drama “The Americans,” which seemed in its first season to be a worthwhile show that was as good as it was going to get. But after this week's season premiere, and although it is still very early in 2014, “The Americans” is suddenly in the running as one of the best series of the year.

That's certainly preferable to the dreaded sophomore slump. Remember when “Lost” and “Desperate Housewives” followed their fantastic first seasons with what can only be described as sloppy seconds? More recently, ABC's once-sizzling “Revenge” followed a dynamic freshman season with a sophomore mishmash of increasingly convoluted and disinteresting story lines from which it has never recovered.

The term “buzzy” is egregiously overused by the media, but I have to believe “The Americans” is about to become one of the most “buzzed about” series on television. My own response to this show during its first season was somewhat subdued, although oddly I felt that the end result was greater than the sum of its parts. The pacing was somewhat sluggish, many scenes were overly talky and the action scenes were unremarkable. I never regretted watching episodes of “The Americans” last year, and by season's end I was glad I had seen them all, but along the way many of them felt like homework rather than entertainment. That may have been a response of comparison -- “The Americans” was obviously a quality show, but it didn't strike me as being of the same quality as many of the great dramas currently on broadcast, basic and pay cable.

If that was the issue, this week's second-season premiere resolved it, over and over again. I won't reveal spoilers here, but it was filled with shocks and surprises the likes of which topped anything that came along last year. All of them reinforced who and more importantly what the uncommonly complex characters in this show are and heightened the unrelenting tension of their circumstances to a degree that was almost stifling. I'm not spoiling anything by revealing that the raised stakes and the characters' responses to them are grounded in the chilling reality that their children are now suddenly (yet still unknowingly) in the middle of things and in unexpected potential danger.

Keri Russell and Matthew Rhys, as undercover Soviet spies posing as a happily married couple with children while executing dangerous missions in Washington D.C. during the early years of the Reagan presidency, were pretty much flawless last season, rising to every challenge the writers and producers handed to them (and there were many). Yet both of them took their performances to new levels in this week's episode -- especially Rhys, who now disappears into Philip Jennings in the way Jon Hamm transforms into Don Draper and Bryan Cranston became Walter White.

I am consistently fascinated by the degree of adult content that is infused into FX's original series. Like AMC and Sundance with their outstanding originals it is offering advertiser-supported, unapologetically mature entertainment that might be considered R-rated to an adult audience -- most of the time with a dedication to quality, intelligence and sophistication that eradicates any concerns about that content somehow tainting a sponsor or offending a viewer. It all began in 2002 with the arrival of “The Shield” on FX, which in hindsight strikes me as both the boldest and most progressive programming move any network has made in this millennium to date.

Episode after episode, on shows like AMC's “The Walking Dead” and FX's “Sons of Anarchy” and “American Horror Story” I continue to see and hear things I never thought I would see or hear outside of pay cable. In recent years I’ve seen so much sex, nudity and graphic gore and violence and heard so many curse words on ad-supported cable that I didn't think anything else could startle me. And then along came a sex scene on this week's “The Americans” the likes of which I don't think I have ever seen on television -- even on HBO or Showtime. It wasn't gratuitous or salacious -- in fact, it actually advanced the development and dynamics of certain characters. I promised no spoilers, so I won't go into detail, except to note that a lyric from a certain Monty Python song about sex might come to mind while watching it. The lyric suggests that “life will be fine” if two people do what Philip Jennings and his wife Elizabeth were caught doing, but on “The Americans” that clearly isn't the case.