Will Additional Exposure On Hallmark Channel Help Boost 'The Middle?' 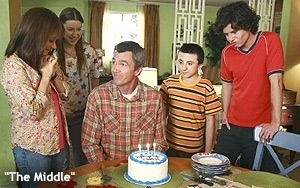 “The Middle” is in many ways the best family comedy to come along since “Roseanne” and “Home Improvement.” It’s a solid performer as the leadoff entry in ABC’s Wednesday night comedy block, but for reasons that continue to elude me, it has never enjoyed the robust ratings that it has deserved from the start. Last fall, repeats from its first four seasons began playing weeknights on ABC Family. This week, “The Middle” joined the nightly Hallmark Channel lineup as well. Maybe with all this additional exposure it will finally get the respect it deserves.

The performance problem that has haunted “The Middle” may have something to do with the fact that it debuted on ABC at the same time as the network’s most successful comedy, the four-time Emmy Award-winning “Modern Family.” I’m not suggesting that “Modern Family” has not deserved the attention and acclaim it has received during the last five years. But I have always felt that “The Middle” deserved much of the same acclaim, and through the luck of timing has not received its due -- perhaps because it sits in the shadow of the mighty “Modern Family."

Of course, there is nothing people seem to enjoy more at this particularly puzzling time in our economic history than watching and adoring those who are financially fit, which may explain why the Pritchett and Dunphy families on “Modern Family” are more popular than the cash-strapped Hecks on “The Middle.” I’d like to suggest that the well-off Pritchetts and Dunphys are sometimes difficult to relate to because they have so many fancy-people problems often brought about by their better-homes-than-yours lifestyles, while the Hecks grapple with the same everyday problems that plague us all. Still, “Modern Family” has entertained me for more hours than I can recall, and the point of this column is not to put it down, but to champion “The Middle.”

I favor “The Middle” because, unlike almost every other sitcom on television, it finds great heart and humor in the everyday travails of a family that lives the way most families do: Outside of major urban centers in houses that exist to live in rather than look at. They work at jobs that offer some level of daily satisfaction but no real opportunity for advancement or fulfillment and they’re always behind on their bills. That all sounds somewhat depressing, but the enormously insightful producers and writers of “The Middle” and its remarkable cast can often make an unremarkable neighborhood in fictional Orson, Indiana, where the series takes place, feel like the happiest place on earth.

That happiness often comes about at the end of typically frantic and harried days for the Heck family, when all five of them, or some combination thereof, realize just how much they care about each other -- not in the mushy, gushy, overly expressive way that is typical of families and friends in so many sitcoms, but in quiet moments at the dinner table, on the couch in front of the TV or while getting ready for bed. Most of those moments seem to revolve around “Frankie” Heck, the middle-aged mom at the center of it all played by Patricia Heaton with the same great comic timing that earned her two Emmy Awards for her work on “Everybody Loves Raymond.” (It’s a crime that members of the Academy of Television Arts & Sciences have not seen fit to even nominate her for this role.) “Frankie” Heck, a hard-working wife and mother who is in over her head, as most working wives and mothers are, is as kind and loving as she is cranky and flawed. In many ways she is the Roseanne Connor of our times, without the overtly obnoxious character traits.

Similarly, Neil Flynn, as Frankie’s husband Mike, is giving one of the best performances I have ever seen of a perfectly average working-class man who seeks only to do his job, care for his family, stay below the radar and relax in the relative comfort of his own home when the day’s work is done. Though the characters feel worlds apart and the actors have dramatically different performance styles, when I watch Flynn as Mike on “The Middle” I often think of Carroll O’Connor as Archie Bunker on “All in the Family.” Mike is a quiet, unassuming guy, Archie a temperamental blowhard. But I could imagine the two of them enjoying a beer or a ballgame together.

Charlie McDermott, Eden Sher and Atticus Shaffer, as teenagers Axl and Sue Heck and their younger brother, oddball Brick, are just as strong as Heaton and Flynn in every scene they share. I have said all along that McDermott and Sher are playing the most entertaining and believable teenage characters on television. They never fail to bring the funny, but they always add a lot of heart as well.

The same can be said about every aspect of “The Middle.” That’s what makes it a perfect fit on both Hallmark Channel and ABC Family.