A Profound Look At The Future Of Media - On An Episode Of 'The Waltons'? 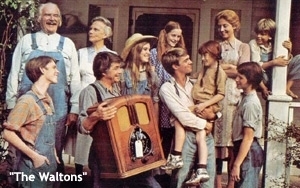 Of the many great treats featured in Hallmark Channel's weekly schedule, the classic family drama “The Waltons” is one of the best. I remember a period spanning many years when this show and its characters were part of the national conversation. They were household names; their routine “good nights” to each other at the end of every episode were mimicked by adults and kids alike. “The Waltons” used to be referred to as iconic, but I’m not sure if that’s true anymore. I can't help but wonder if are there any millennials out there who have ever even watched this show.

To be honest, I'm not sure I care. “The Waltons” was there for me when I was a kid, for many of its nine seasons, and I will always treasure it for that. I found my weekly visit to Walton's Mountain in fictitious Jefferson County, Virginia to be the perfect escape from whatever was on my mind or the perfect background noise when I was doing my homework.

That said, I have to admit that my primary memories of “The Waltons” are somewhat vague and also limited to the show's early seasons. In its later years I lost interest altogether, partly because I was busy with other things, but also because the show was starting to go through its own aging process. Sooner or later each of the five adult stars would leave the series, due either to death (Will Geer), illness (Ellen Corby), or the desire to move on to other things (Michael Learned, Richard Thomas and, eventually, Ralph Waite). Further, I can't recall a time or place when “The Waltons” was prominently showcased in syndication, so in most instances I saw episodes of this show once way back in the Seventies and never again.

I'm writing this column because a recent episode shown on Hallmark Channel -- episode 17 from Season Nine, to be exact -- really hit home for me now, as a long-time television critic, in a way that it wouldn't have when it first aired. Titled “The Threshold,” it dramatizes the arrival of television on Walton's Mountain in the late Forties and offers great futuristic insight about all media.

As always, the episode opens with narration by a middle-aged John Boy (voiced by series creator Earl Hamner, who based the series on his own teenage years and young adulthood). “The postwar world is an era of innovation,” John Boy says. “We stood upon the threshold of a new age which was ruled by sudden change. Technical advancements in medicine, science and electronics had a profound effect on the way we lived and thought. None of us dreamed how deeply we would have been affected by those advancements even though we were close by when it all began.”

These words were written for a program about the Forties that was produced in the Seventies, but Hamner could have been talking about the realities of this digitally driven millennium, as well.

In the episode, John Boy, who had returned home after serving in the military to write a novel, and who wanted to teach at nearby (and fictional) Boatwright University, tries to encourage the creation of a television department at the school. (Until I caught this episode on Hallmark I had forgotten that in the eighth and ninth seasons of the show a different actor, Robert Wightman, had replaced Richard Thomas as John Boy!)

“This is going to give Boatwright University a head start,” John Boy enthuses to the dean. “Sooner or later colleges all over the country will be teaching television techniques.”

“I'm afraid our Board of Trustees doesn't agree with you,” the dean replies. “According to them, television is still experimental and will never compete with radio.”

Determined to change the minds of the trustees and land himself a teaching job in a new television department, John Boy sets out to write a script for a show about television. Meanwhile, his inventive younger brother Jim Bob sets out to build an actual television set, which he actually does, although he has to mount an antenna on the top of a hill (where reception is the best) and run a wire all the way down to the Walton home -- in effect creating a form of cable TV even before broadcast came into its own.

John Boy's script is filled with insights about the potential of television (and social media, for that matter), especially in these words: “We must recognize that television is the frontier of today. It will affect the future of our world in ways we can only begin to guess. Art, music and literature are not passive. They demand someone to look and listen and to think and respond. It will be the same with television, and audiences must learn to participate intelligently, for they will share the responsibility for what they see.”

Amazing fellow, that John Boy, correctly predicting that television would eventually be an interactive medium. He could have been talking about “American Idol” and “The Voice.”

But he decided that his original draft was too stuffy, and was moved to give it a quick rewrite after looking through a picture book with his little nephew John Curtis, which gave him a glimpse into the future “where the pictures were moving.” John Boy wrote: “Boys and girls growing up in out of the way places like the hills of Virginia could share in things they might not otherwise see, things like opera and ballet and concerts and theater. Television will take them across the world so that for John Curtis and his generation there will be no strangers, just people who accept and understand each other.”

I'm not sure we’re there yet, but John Boy was certainly on to something. Five decades later the wisdom of “The Waltons” still resonates across all media.

John Boy's very basic television presentation, made via closed circuit, ultimately impressed the Boatwright trustees, and they moved forward with the creation of a television department.

As expected, the episode closed with Walton family members saying good night to each other. This time the exchange was between John Boy and his kid sister Elizabeth.

“John Boy, were you nervous on television?”

“Not once I got started.”

“Maybe you'll have your own television show one day.”

“What would you call it?”

“Since I write best about this family I guess I'd call it ‘The Waltons.’ Good night, Elizabeth.”

tv
1 comment about "A Profound Look At The Future Of Media - On An Episode Of 'The Waltons'?".
Check to receive email when comments are posted.
Next story loading