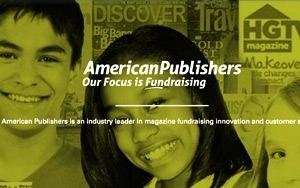 The acquisition will allow M2 to expand its current nonprofit and charitable fundraising business, which helps raise money for organizations like the Girl Scouts of the USA with magazine subscription sales, while giving American Publishers access to M2’s proprietary tools, including personalized online storefronts and an avatar creator, for the school fundraising market, where American Publishers is already well established. The online tools will augment traditional sales techniques including print catalogs and door-to-door sales.

Liberta Abbondante, senior vice president of consumer marketing for Hearst Magazines, stated: “M2 is the perfect fit for American Publishers. They have taken fundraising to new levels with their Girl Scouts’ partnership and have the vision and technological expertise to do the same in the school market.”

Active Interest Media is giving MuscleMag a makeover, with new content and design to make the magazine more accessible and relevant to real people. That means no more glowering, muscle-bound specimens on the cover; cover models will now skew toward a healthier, more fitness-focused ideal, supported by modern, simpler aesthetics.

MuscleMag Editor in Chief Mike Carlson stated: “Bodybuilding magazines have a lot to live down. Over the years, the cover models have become too big and the promises too sensational. And readers find it hard to relate to celebrities on the cover who have full-time trainers and personal nutritionists. We are bringing credibility and transparency back to the genre.”

Bonnie Kintzer has been named CEO of the Reader’s Digest Association, replacing Bob Guth, who is stepping down in early April. Kintzer’s appointment is effective April 7. She previously served as CEO of Women’s Marketing Inc., a media strategy firm. Before that, she held a number of executive positions at RDA from 1998 to 2007. Toward the end of that period, RDA went private in a transaction engineered by Ripplewood Holdings in November 2006. Kintzer is the company’s fourth CEO since 2011. The high executive turnover has accompanied a number of subsequent changes in ownership and two bankruptcy declarations in August 2009 and February 2013.

Kim Sealy has been named publisher of Working Mother magazine, a new role at the publication. She previously held the role of Eastern advertising director of integrated sales, responsible for both print and digital sales initiatives. Before joining Working Mother in 2007, Sealy worked at magazines including Jet and Teen People.