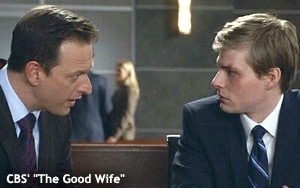 Note: If you are a fan of “The Good Wife” and have somehow remained uninformed about the shocking event in last night’s episode, you may wish to save this column for a later read, as it revolves around what may be the biggest potential spoiler of the television season.

What stunned me most about last night’s game-changing episode of “The Good Wife” was the fact that I didn’t see it coming. There hadn’t been a hint of a whisper of a guess anywhere in the media that something so huge was about to happen on one of the most talked-about series on broadcast television. The breathtaking event in the final act made the episode even more shocking than the one last fall in which attorneys Alicia Florrick (Julianna Margulies) and Cary Agos (Matt Czuchry) and a number of their associates left Lockhart Gardner to start their own firm. And yet, this event was somehow kept secret in this era of perpetual spoilers and ever-present media leakage. How is this possible in a world where the mere touch of a phone or click of a mouse can expose everything?

In hindsight, the only clue that something major was going to happen was the invitation CBS sent out two weeks ago for a special “Good Wife” press event this Wednesday at the Ed Sullivan Theater. But I assumed the timing of it had something to do with storyline twists and turns that were coming in the weeks ahead, rather than the immediate aftermath of last night’s episode. (I suppose that’s the same thing. The event in last night’s episode will certainly send every existing storyline on the show careening in new directions. I can’t imagine what’s going to happen, and to whom, although crafty CBS ended last night’s show with an extended preview of the rest of the season.

I’m far enough away from the top of this column to spill the beans -- Attorney Will Gardner (played by Josh Charles), one of the primary characters on “The Good Wife” and one intricately involved in every significant story this season -- was killed in a horrific courtroom shooting towards the end of last night’s episode. It was a wholly unexpected move on the part of executive producers and series creators Robert and Michelle King, especially during a season that has already seen a narrative upheaval the scope of which is largely unprecedented in broadcast television drama. The Kings (with the support of CBS) clearly understand what makes British and basic cable dramas so strong: The understanding that anything can happen at any time and the willingness to keep everything fresh, if not raw. Even the most important characters on a show’s canvas can disappear without warning.

Frankly, I’m a little tired of the “golly gosh they killed someone” glee with which critics respond every time a character of note dies on any series. Death -- once avoided at all costs on dramatic television series -- has come to feel like the lazy way to call attention to a show. But that wasn’t the case with Will’s sudden end on “The Good Wife.” He wasn’t just a primary character whose loss will be felt or exploited for an episode or two and then forgotten. Second only to Alicia Florrick, Will Gardner was integral to the very foundation of the show.

Early in its fifth season, an age when most dramas start to feel their age, “The Good Wife” became an entirely new show when it split the legal team at its center into two warring firms. Now, as it moves toward the end of the season, it has just become a new show all over again -- and in a totally believable way.

Collectively, the most extraordinary thing about last night’s episode was the many choices that the Kings and their writing team and director Brooke Kennedy made throughout the hour. Will’s death came about not as a result of the primary cases with which he has been involved, one of them the investigation by the Office of Public Integrity into the possibly fraudulent election of Alicia’s husband Peter Florrick (Chris Noth) as the governor of Illinois (another game-changing story this season, which actually kicked off at the very end of last season). Rather, it was the tragic sudden end of a small story from an episode several months ago, in which a college student was accused of murdering a young woman.

The story of the accused student was as powerful as anything else in the narrative: Innocent or not, he was plainly overwhelmed by the posturing of lawyers in the courtroom who held his fate in their hands and by the brutal assaults he was suffering while being incarcerated. When he snapped under the stress of it all, grabbed a guard’s gun and wildly opened fire, killing Will and injuring many others, his actions were not impossible to understand. The final shot of this young man (played to perfection by “Weeds” alum Hunter Parrish) had him sitting on the floor, frantically trying in vain to blow his own head off by repeatedly pulling the trigger on his now empty gun.

That shot alone was an extraordinary choice, but there were many more, most memorably the pleasant final exchange between combustive former lovers Will and Alicia, when she came to the courthouse to tell him that the accused young man’s parents had approached her for a second opinion when it began to appear that Will was going to lose their son’s case. Similarly, an earlier conversation over drinks between Will and his firm’s crack investigator Kalinda Sharma (Archie Panjabi) became a profound one after the tragedy. I was also impressed by the choice to begin the shooting sequence not in the room itself but in another court down the hall, where Will’s partner Diane Lockhart (the invaluable Christine Baranski) was involved in another trial that was suddenly interrupted by the unmistakable sound of gunshots. Meanwhile, we still don’t know if the student is actually guilty of murdering the girl. Did the legal system drive him to madness? That’s a fascinating story choice all its own.

There is so much more to praise, but no more room in which to do so. There will be a lot more written about “The Good Wife” this week, and likely every week for the rest of this season. As I have stated before, every other broadcast network can learn a lot from this show. Like Fox’s “24” before it, and NBC’s “The Blacklist” now, “The Good Wife” perpetually reminds us all that the most powerful drama on television doesn’t have to be confined to pay and basic cable.

tv
3 comments about " CBS' 'The Good Wife' Delivered The Broadcast Drama Shocker Of The Season ".
Check to receive email when comments are posted.
Read more comments >
Next story loading