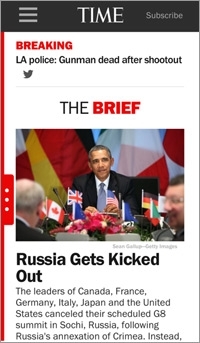 Yeah, I go back that far -- to the early days of magazines on the Web via Time Warner's Pathfinder debacle. I was no prophet in writing critically of the company's attempt to create a virtual newsstand of just its own properties. Those were the pre-aggregation days of extreme media brand hubris. It seems almost quaint in retrospect. But there was a day when media companies refused to link outside of themselves, and companies like Time Inc. really thought their portfolio of magazine brands represented all that a media consumer really needed.

And man, were there misfires after that. It took years for the popular Time Inc. property People to find its footing. I lost track of how many times that magazine played peekaboo with readers online -- inside and outside of AOL, paywalls, etc. -- until it finally embraced Web with non-subscriber content that topped over a billion monthly page views at one point.

Things have gotten a lot stronger at Time Inc. and its digital practice since those shaky days. And it is especially gratifying to see the newly relaunched flagship newsweekly (the last newsweekly standing) with a responsive design that works exceptionally well on smartphones. Time.com makes very strong use of Web app design. The home scroll of latest top stories has a nifty slide-in panel that provides quick access to the latest and most popular headlines in any main news category as well as a tab just of videos. This proves to be one of the more efficient ways I have seen to get a massive amount of breaking news at a glance.

Also well done is the integration of advertising. The in-line units are oversized but not too intrusive. Most of the creative is large enough for easy reading and decent impact. It is a mixed bag, to be sure. There are some banners that feel like remnants shopped out to the highest low-level bidder atop a scroll that also has a premiere advertiser with a large display unit. Publishers appear to be mixing and matching ad revenue sources these days on their mobile sites, and the cacophony is beginning to become apparent.

Still, Time.com is a strong example of mobile Web/adaptive design that really works on the handset. It gives good lateral movement across its content verticals, and that sliding headline panel is contextually aware, so it reflects the current vertical you are in. On a tablet in portrait mode, that panel becomes a left rail that allows for very quick scanning of more content. The access to story briefs and quick headline scans map well with the user’s need to catch up quickly. Even the video recaps are liberal in citing a range of non-Time sources.

This is way off Pathfinder’s original misdirected trail.