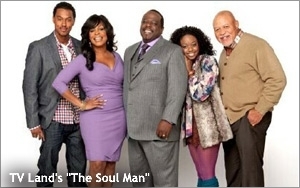 Yesterday, when I wrote about the special live episodes of “Hot in Cleveland” and its spinoff, “The Soul Man,” as well as the live commercials that were to be presented in each, I wasn’t prepared for what I was about to enjoy. I expected yet another live presentation of episodes that -- like all such live sitcom telecasts -- would be fun to watch but would feel a little off, absent the perfection that comes from frequent re-takes during tapings and careful dubbing and editing afterwards

I’ll say this about live sitcoms: They may not be flawless, but they force the production to complete an episode within a 30-minute time frame. In contrast, the typical taping of a three-camera situation comedy today runs between three and four hours! (During its run in the Seventies, tapings of the classic “All in the Family” were almost always in the can in 45 minutes, tops. Discuss.)

Anyway, I tuned in to “Hot in Cleveland” and “The Soul Man” for the live sitcom experience, and to see whether the live commercials would work (they did -- especially the spot for Bush’s Grillin’ Beans featuring “Soul Man” star Niecy Nash). But I got something else entirely -- something that played brilliantly to the strengths and weaknesses of live telecasts, and in the process, added yet another layer of lively TV Land-style nostalgia to the viewing experience.

This was especially true of “Hot in Cleveland,” which was the more wonderfully wacky of the two shows, precisely because it was live. Series creator and executive producer Suzanne Martin and her team did something entirely surprising: They treated the show more like an extended, unashamedly funny skit from a classic variety series than a current situation comedy. If you prefer a more contemporary comparison, the live “Hot” was somewhat comparable to a skit on “Saturday Night Live,” but I think that in terms of sublime comic energy it far outdistanced anything I have seen on “SNL” in quite a while, except perhaps for the “Family Feud” sketch featuring stars from CBS shows pitted against several from NBC shows. (That was the standout sketch on the final episode of “SNL” in 2013 -- the one with Jimmy Fallon as host and Justin Timberlake as musical guest.)

The four ladies who star in “Hot” -- Jane Leeves, Valerie Bertinelli, Wendie Malick and the awe-inspiring Betty White -- were typically terrific last night, as were recurring guests Georgia Engel and Dave Foley and guest stars Constance Zimmer, Ken Jeong, D.W. Moffet, “Jeopardy” host Alex Trebek and Cedric the Entertainer as his “Soul Man” character Reverend Boyce “The Voice” Ballantine. But the real stars of the half-hour were writer Laura Solon and director Andy Cadiff. Rather than try to push through an earnest live telecast and try to make it come off like any old episode, only live, they embraced the idea that this was something different and went way over the top -- with extraordinary comic results. Every single actor in the show was given great material and allowed to run with it. I think this was the funniest episode of any sitcom this season.

There were frequent and funny references to the real lives of the players -- most memorably endless praise by White and Engel’s characters in Cedric’s presence for Steve Harvey as the funniest entertainer and the best game show host working today (“He’s like the original King of Comedy!” Engel’s character exclaimed, to a great slow burn from the real thing), and Cedric’s return digs about White’s previous sitcom hits “The Golden Girls” and “The Mary Tyler Moore Show.” But the meta-madness didn’t stop there. The fourth wall was routinely broken, mostly during intrusions by Trebek and during Cedric’s quick visit.

In fact, Cedric took the fourth wall thing one step further during “Soul Man,” at one point walking by the studio audience as he moved from one set to another during a scene change. He even stopped to say hello to TV Land president Larry W. Jones (who was beaming in his front-row seat, and deservedly so). Then it was back to the script. (“Soul Man,” incidentally, ended the live evening on a grand celebratory note with a performance by hip hop artist B.o.B. that drew the studio audience right in. Trebek was busting moves in the front row, clearly having a great night.)

Malick once again proved that she is one of the best physical comediennes on television. White again demonstrated that her ability to deliver wickedly funny cutting jabs, which began with her portrayal of Sue Ann Nivens on “MTM,” has only improved with age. Bertinelli showed that she is still as cute and comical as she was decades ago on “One Day at a Time.” (In the only “error” I noted during the show, Bertinelli lost her composure and couldn’t stop laughing at Foley, turning away from the camera. It only added to the overall enjoyment of the episode -- just like when Fallon lost it watching Timberlake impersonate him in the “SNL” sketch referenced above.) Leeves made clear that she can more than hold her own in the midst of inspired comic lunacy.

Foley and Jeong were so consistently funny throughout that I couldn’t help but think of the way Tim Conway and Harvey Korman always cut loose (and cut up) on “The Carol Burnett Show.” In fact, the entire episode of “Hot” felt more like an extended “Burnett” sketch than anything else. I can’t think of higher praise. And I can’t help but think how much we are all missing because of the absolute absence of comedy-variety shows in prime time. What did we do to deserve that?