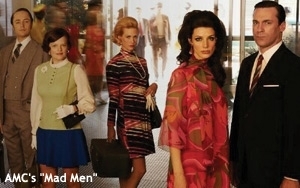 I'm still not sure what to make of “Mad Men” this season. Granted, we are only two episodes in, but we're only getting seven this year, and I guess I was hoping for something a little more enthralling than what I have seen so far. If and when any dramatic momentum begins to build anywhere on the canvas, it's going to be forced to a premature halt because of the way AMC has chosen to showcase the series' last lap (saving the final seven episodes for 2015).

It's not that the first two episodes of the season weren't filled with terrific little scenes and great moments for this show's fabulous ensemble. I'm still thinking about the scenes of Don and Megan together in Los Angeles -- at the airport and in Megan's funky rental in the Hollywood Hills, which is undeniably creepy at night despite its breathtaking views. I'm thoroughly enjoying Pete's story line, as he settles into the L.A. groove and explores a new relationship with that ditzy realtor. Back east, I have liked everything involving SC&P secretaries Shirley and Dawn and the entire story in last night's episode about Sally learning that her father is on a paid leave from work. Sally really stopped the show with her simple and surprising “I love you” to her father at the end of the hour.

But overall I’m just not that impressed at the moment with the folks at SC&P, each of whom (with the exception of the always exceptional Joan) seem to be spinning their wheels this season. I don’t think it’s a coincidence that the show pops excitingly to life when the focus shifts to the characters on the West Coast (including Don during his visit). There is even a noticeable spark whenever a character in the New York office makes a reference to the freshly relocated Bob Benson out in Detroit. (What a shame that James Wolk had to leave the series to star in CBS’ “The Crazy Ones.” Bob was exactly the type of highly distinctive and profoundly quirky character “Mad Men” needed to bring new life to its last seasons.)

Frankly, the L.A. scenes in these last two episodes have me wishing that “Mad Men” creator Matthew Weiner was going to continue his franchise with a spinoff that would follow some of his characters and a host of new ones through life as it was lived in Los Angeles in the Seventies. The foundation is certainly there for another extraordinary period drama.

For now, and unlike in previous seasons, it feels like the characters on “Mad Men” are living in some kind of bubble. They seem not to be preoccupied in their daily lives with the consistently combustible world around them that made 1969 one of the most tumultuous years in modern American history. I wish the season had started a little further into the year, so that the narrative might already be informed by Woodstock and Altamont, the moon landing, the Manson murders, continuing campus unrest, the Stonewall riots, the Kennedy incident at Chappaquiddick, continued concerns about the Cold War and so much more. Anyone alive at the time knows that everyday conversation almost always included talk about the perpetual fresh horrors of the Vietnam War and the escalation of the increasingly competitive and sometimes threatening space race, among many other things.

That’s not to say that the story lines in “Mad Men” should become bogged down by the real life events of the time. But for at least some of “current” events and issues not to be top of mind among the characters feels somehow false. This was a period when nightly news programs on the broadcast networks were watched in almost every household in America, and they almost always included fresh footage from Vietnam presented in largely uncensored fashion that hadn’t happened before and hasn’t since. People couldn’t help but react.

I’m hardly the only viewer who feels that “Mad Men” needs some kind of direct connection to any one of the many giant events that rocked the foundation of the country throughout 1969. That’s why columns and blogs about the show have been throbbing with ghoulish anticipation that the story of Megan alone in Hollywood is going to somehow intersect with or come to reflect the slaughter that year of pregnant actress Sharon Tate and several of her friends at the Hollywood Hills home Tate shared with her husband, Roman Polanski, who was out of the country when followers of Charles Manson committed one of the most heinous crimes in history.

Maybe I’m being too tough on “Mad Men,” which remains one of the finest series on television even during the occasional run of episodes that aren’t quite as enthralling as expected. Indeed, if expectations are too high then the fault lies with series creator Matthew Weiner, who so brilliantly set the bar for this show way above everything else we had seen on television before its 2007 premiere, with the exception of “The Sopranos.” But I want to look forward to each of its remaining 12 episodes with breathless anticipation and find plenty to savor in every one of them. So far that isn’t happening. Maybe I have just been spoiled by the last season of “Breaking Bad” and the current season of “The Good Wife.” Or maybe I just miss Betty.