Google Wants Women...No, Not In The Creepy Way 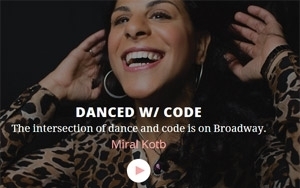 My wife is deeply annoyed with the new AMC series “Halt and Catch Fire” about the burgeoning PC industry in the mid-80s. “They always get the geeky girls wrong,” she complains. The punkish rad coder Cameron is not what a comp sci type of the day would be, she argues. “Why is she so socially inappropriate but sporting lipstick?” I haven’t quite gotten out of my wife exactly what an accurate depiction of an 80s girl geek would be, although she wears the flag herself freely. She is among a precious few female college-level teachers of computer science in the country, and part of her own mission has been to share the fun of coding with women and get them to consider comp sci degrees.

Apparently now she has a partner in Google, although I am not sure she will appreciate the effort. The media giant launched today its “Made with Code” site aimed probably more at girls than women, and I am afraid to show it to my wife. Yeah, it's pink.

Okay -- that aside, the site is an attempt to appeal to girls by tying coding to the things they likely love. And yeah, there are images of bracelets, accessories, music, online social avatars, etc. There are very simple drag-and-drop projects that seem to be more about form filling than coding. There is a section of mentors demonstrating how some women are changing their and our world with programming. There is also a directory of local programs and coding camps.

Google says it is making the site because “if girls are inspired to see that Computer Science can make the world more beautiful, more usable, more safe, more kind, more innovative, more healthy, and more funny, then hopefully they will begin to contribute their essential voices.” Google, of course, has some of its own issues regarding gender imbalance. According to its own recent audit, 83% of the companies tech workers are male. Which is not to say the company is discriminating. In its non-tech areas there is a much healthier 48% female employee count. But it reflects the boy geek culture that still overwhelmingly dominates comp sci and engineering schools.

It is at least a stab in the right direction. As my wife tells it, moving this needle is a slow, iterative process. Having more women in the field teaching this stuff seems to be among the most effective techniques for recruiting more. Deliberate marketing “appeals” to girls with somewhat canned and stereotyped lures like changing the world and making bracelets always has a contrived quality. Actually seeing that the field and culture of the profession is at least hospitable to women may be more important.