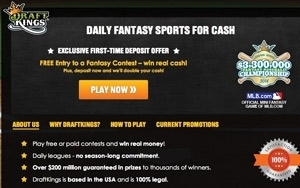 DraftKings.com has agreed to permanently stop touting itself as the “industry leader” and No. 1 destination for fantasy sports, the Better Business Bureau's National Advertising Division said on Wednesday.

The BBB says it began investigating DraftKings' ads in response to a challenge by rival FanDuel. DraftKings told investigators that it decided to revise its boasts for reasons unrelated to the probe.

FanDuel challenged DraftKings.com's ad boasts -- which appeared on its site and social media services -- on the grounds that the claims gave DraftKings.com an unfair competitive advantage.

FanDuel said that fantasy sports players are more likely to use sites with a large pool of other users, the BBB says in its opinion. The company argued that its competitor misleads users into thinking it's the “most widely used, most popular, or highest-paying daily fantasy sports platform.”

FanDuel also argued that claims about being an “industry leader” or No. 1 destination should be backed up with metrics. FanDuel said that it ranked higher in “global popularity” than DraftKings, according to data by analytics company Alexa. FanDuel also alleged that it had nearly twice as many visits as DraftKings.com for the month of March, according to metrics by SimilarWeb.

Even though DraftKings.com stopped touting itself as the industry leader, it told investigators that it believed the statement was merely “puffery.”

But the National Advertising Division said in its opinion that DraftKings.com was obligated to stop using terms like industry leader in its ads, due to the lack of supporting evidence for the claim.