Season Two Of FX's 'Fargo' Will Be Connected To The First 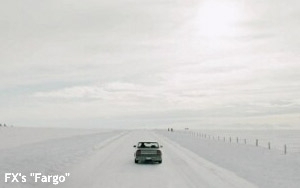 FX made big news yesterday with the official announcement that it has renewed its critically acclaimed spring franchise “Fargo.” In making the announcement, FX revealed that “Fargo” Season Two will tell an entirely new story, have an entirely new cast and will be set in a time period different from Season One.

Frankly, I felt so immersed in what will now be considered the first season of “Fargo” that I can’t imagine watching a series by that name that does not include the further adventures of Molly Solverson and Gus Grimly, the characters so vividly realized by Allison Tolman and Colin Hanks, respectively. (Conversely, by the time each season of FX’s “American Horror Story” has come to its conclusion, regardless of whether I enjoyed it or not, I’m generally fine with never seeing its characters again.)

“Fargo” creator and executive producer Noah Hawley, who wrote every episode of Season One and will do so again with Season Two, had fun in the telling of his story by establishing a small link (the suitcase with the money) between the 1996 film by Joel and Ethan Coen that started it all and his equally fine show. Season Two will feature a narrative link of an entirely different kind -- it will revolve around Molly’s father, Lou (played in Season One by Keith Carradine). The story -- about a terrible event of some kind, of course -- was already hinted at in Season One, I believe in that chilling conversation at the diner between Lou and Malvo (Billy Bob Thornton).

The Season Two story will take place in 1979 and will be set in Sioux Falls, SD; Luverne, MN -- and of course, Fargo. Lou will be 33 years old and will have recently returned from Vietnam. Molly’s mother will be one of the characters, as will Molly herself, at age four.

Call shows like “Fargo,” “American Horror Story” and HBO’s “True Detective” what you will … miniseries, event series, limited series. Regardless, they represent an exciting new approach to program development after entirely too many years during which the broadcast networks -- once the reigning masters of the miniseries and limited series formats -- did their best to convince the world that there was no longer any interest in them. HBO never gave up on miniseries, and through the years other pay cable and basic cable networks have embraced them -- most notably Starz, Syfy and USA Network. But it wasn’t until FX came along with the first season of “American Horror Story” and the interesting idea of its creator, Ryan Murphy, to turn it into an long-form anthology series of sorts featuring a repertory company of actors returning season after season to play entirely new roles in entirely new stories, that short-run, self-contained formats suddenly became so attractive to talent and viewers alike.

It doesn’t hurt that these shows seem to have been custom designed for binge-viewing, which is more of a happy coincidence for them than a deliberate strategy. Or that they call for shorter time commitments (a few weeks rather than eight or nine months) from viewers who prefer to watch them live or within a week of their episodic premieres.

This new format -- or new approach to an old format -- opens up the creative end of the television business to countless writers, producers and actors who don’t care to commit several years of their lives to a project but who are also desperate for good work in quality “short-term” productions the likes of which are rarely provided anymore by the movie industry.

Which brings me back to mini/limited/event series as they are understood today: Projects that fit these descriptions, along with standard scripted drama series (some of which only run from 8-13 episodes per season, making them look and play quite a bit like mini/limited/event series, even though they clearly are not) plainly offer the most desirable work opportunities available to actors and other content creators. Just ask Halle Berry or Jessica Lange or Billy Bob Thornton.

They also provide terrific opportunities for advertisers who may be looking for unique projects in which to buy time or very special properties with which they want to become associated.

Considering the ratings and Future Viewing Potential these fresh and refreshed formats are generating after being with us for only a couple of years -- and watching them dominate so many high-profile awards ceremonies -- it would seem that network and streaming schedules will fill up with them in the years to come. But no matter how big the genre gets, “Fargo” Season One will certainly remain one of its modern masterpieces, and I’m betting Season Two will be pretty extraordinary as well.