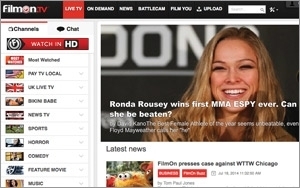 A federal judge in Manhattan said on Tuesday that she's likely to hold streaming video company FilmOn X in contempt of court for continuing to operate after the U.S. Supreme Court ruled that Aereo's streaming service infringed copyright.

“I'm inclined to grant the contempt motion,” U.S. District Court Judge Naomi Reice Buchwald said at the conclusion of an hourlong hearing, during which she blasted FilmOn X for its “aggressive” decision to keep operating after the Supreme Court ruling.

FilmOn X continued to stream major broadcasters' shows to New Yorkers' smartphones and tablets until around July 8 -- almost two weeks after the Supreme Court reversed a pro-Aereo decision issued by the 2nd Circuit Court of Appeals. By contrast, Aereo suspended its service several days after the ruling.

Buchwald told FilmOn X's lawyer, Ryan Baker, that the company should have removed the broadcasters' programs as soon as the Supreme Court ruled against Aereo. “The day the Supreme Court decided Aereo, you no longer had the cover of the 2nd Circuit's opinion,” she said. “On that day, FilmOn X should have pulled all of the content.”

Tuesday's contempt hearing marked a continuation of a 2010 lawsuit by broadcasters against FilmOn. That case resulted in an injunction prohibiting FilmOn from infringing broadcasters' copyrights. At the time, FilmOn wasn't using the same dime-sized antenna technology as Aereo. But after Aereo emerged, FilmOn said that it, too, would use multiple-antenna technology. Last year, FilmOn started calling its streaming service FilmOn X. Earlier this year, the company said it started using yet another technology, which it calls “teleporter.”

Until two weeks ago, FilmOn X took the position that wasn't infringing television broadcasters' copyrights due to the multiple antenna system, which streamed shows on an antenna-to-user basis. FilmOn X, like Aereo, argued that it wasn't “publicly performing” television shows, due to the one-to-one nature of the streams.

After the Supreme Court rejected that argument late last month in the Aereo case, FilmOn X changed tactics. The company now says that it isn't infringing copyright because it's a “cable system” and entitled to a compulsory license.

But Buchwald said Tuesday that FilmOn X can't decide on its own that it's a cable system -- especially given that a federal appellate court in New York ruled three years ago companies that stream content online are not cable systems.

“You don't have the right to predict how the law is going to change when you're subject to an injunction,” Buchwald told FilmOn X's lawyer. “There was no change in the law that gave FilmOn legal permission to do what it did.”

Buchwald hasn't yet officially issued a ruling on the contempt motion. She also hasn't said what sanctions, if any, she will impose.