As They Head To Comic-Con, 'The Flash' And 'Gotham' Have Everybody Buzzing 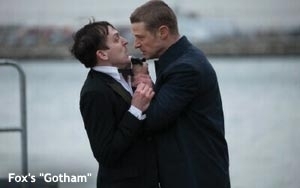 The annual San Diego Comic-Con kicks off tonight and will be in full mad swing by noon tomorrow. So what better time to take an early look at the two new network series that will likely generate the most excitement there?

The two shows I’m referring to are The CW’s “The Flash” and Fox’s “Gotham,” both produced by Warner Bros. Television. It is entirely too early to publish formal evaluations of these shows -- in fact, the pilots I’ve watched are technically still works in progress and may still be subject to future editing. So this column should not be considered an “official” review of either one.

It seems almost silly at this point to worry about discussing “The Flash.” There is so much buzz about it -- all positive, I might add -- that it feels as though it has already premiered. Critics, bloggers and advertisers have had copies of the pilot and have been happily chatting about it since late May. It was previewed (and very well received) at the Summer 2014 Television Critics Association tour just last week, and it is going to be showcased in a giant presentation by Warner Brothers Television and D.C. Comics at the Con on Saturday night for an audience of approximately 6000 genre enthusiasts, every one of whom will likely reveal every detail about what they see to hundreds or thousands or tens of thousands of social media contacts.

I have yet to talk to a single person who has seen it who is not anxiously awaiting future episodes. More than “Arrow,” the series from which it has been spun off, or “Gotham,” which I will get to in a moment, “The Flash” is in every way a fun, fast-moving, action-packed comic book come to life.

In some ways “The Flash” reminds me of the first seasons of “Smallville” before the latter became so unrelentingly violent and dark and dismal. That may explain the very upbeat response to it. It is not a stretch right now to say that almost three months before its official premiere “The Flash” is probably the only upcoming new broadcast series that looks like a surefire hit. I don’t recall a time when The CW could boast the most eagerly anticipated new series of any season.

“Gotham” is another matter. If “The Flash” evokes the early years of “Smallville,” which pulsed with the energy of youth and the bright promise of wonderful things to come, “Gotham” feels very much like the later seasons of that show, when the arrival of adulthood brought everything down into the darkest shadows.

If “The Flash” has been everywhere since May -- generating a sweeping awareness that seems to have been nothing but beneficial for the show -- “Gotham” has been kept as shrouded in secrecy as possible. Fox last month hosted small private press screenings in New York and Los Angeles, Warner Bros. had a screening last week on its lot for members of the TCA and Fox offered two more screenings at the Beverly Hilton (where the TCA tour is being held).

Compared to virtually every other new series set to debut this fall, “Gotham” has not been easy to see. That may be why buzz for this show is lagging behind that for “The Flash” and several others, including another D.C. Comics adaptation from Warner Bros., NBC’s “Constantine” (another critical favorite so far, even if it is undergoing a few creative changes).

It is important to note that “Gotham” is not a superhero show. It’s the story of Jim Gordon, the eager and morally upstanding young detective who would eventually become commissioner of the Gotham City Police Department and work so closely with Batman. Then, as much later in his life, Gordon spends much of his time fighting corruption in Gotham, inside the department itself and in city hall, while also dealing with the various underworld factions jockeying for control of the city.

Bruce Wayne (as a boy freshly traumatized by the murders of his parents), his faithful butler Alfred and the troubled young people who would eventually become some of Gotham’s most vexing villains -- including the Joker, the Riddler, the Penguin, Catwoman and Poison Ivy -- are all part of the narrative right from the beginning.

“Gotham” is somewhat remarkable in that after 75 years of comic strips, comic books, television series, movies and so much more its creators have found a fresh take on the over-arching legend of Batman. That should make it -- and keep it -- interesting to past, present and future fans of the Caped Crusader and/or the Dark Knight in particular and superheroes in general.

I was struck by the darkness and despairing quality of it all, not to mention the random acts of vicious violence the likes of which would have in the past made this show off limits to children but will probably attract today’s little ones like flies, likely with full parental approval, because that’s where we are.

In that respect “Gotham” is as comic book-like as “The Flash,” in that it certainly reflects the dark tone of most superhero comic books today (which are targeted more toward young and middle age males than to kids). On the flip side, “The Flash” evokes the comic books of old, which were suitable for all ages.

“Gotham” will also be showcased Saturday night at that massive Warner Bros. /D.C. Comics event I mentioned above. (“Arrow” and “Constantine” are part of it, too.) That should bring to an end all of the secrecy surrounding it. The response will no doubt be wildly enthusiastic for both. But “The Flash” and “Gotham” are completely different shows. How they continue to build buzz in advance of their premieres and the characteristics of the buzz they build will be interesting to follow.