An Episode Of 'Emergency!' Recalls Life Before VCRs and DVRs 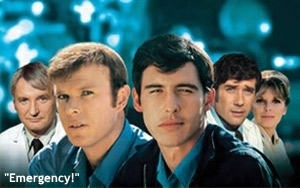 The pre-VCR days are just dim, dusty memories to those of us who came of age with live television as our only viewing option. We had to watch something when it was on or during its summer repeat, or risk the terror of perhaps never again having the chance to see it unless it popped up in syndication in the far-off future.

To anyone born during the VCR period or after, talk of such concerns is generally inconceivable. It’s right up there with having to share one phone -- a rotary model, no less -- with one’s entire family, a reality further complicated by the busy signal, something else from the past that is on the fast-track to extinction.

So I couldn’t help but be amused by a storyline in an episode of the ‘70s firemen-and-paramedics drama “Emergency!” that I recently caught on Me-TV. It began with first responders Johnny Gage (Randolph Mantooth) and Roy DeSoto (Kevin Tighe) watching an episode of a hot police drama from that period, “Adam 12” (also available on Me-TV). Officer Jim Reed (Kent McCord), one of the two heroes on “12,” was in dire peril, having been hit over the head by a bad guy intent on finishing him off. Reed’s partner Officer Pete Malloy (Martin Milner) was also in a pickle.

Johnny and Roy are on the edge of their seats waiting to see what happens next when an alarm sounds and they are called away to one of the emergency rescues of the week -- freeing a burglar who is trapped in an air duct!

As they go about their rescue mission, Johnny is preoccupied by Reed’s plight on “Adam 12.” He can’t stop wondering how Reed and Malloy will get out of the jam they were in and he fears he will never find out.

“It’s just a television show,” says Roy. “It doesn’t bother me in the slightest. I know they’ll be back next week with another problem.” Plainly, “Emergency!” existed in an earlier and more secure time when primary characters never died on television shows (except for Lt. Col. Henry Blake on “M*A*S*H,” whose death in the season finale of the show’s third season, in March 1975, was the first surprise demise of a beloved character on a top-rated series and rocked the nation).

Johnny takes no comfort in Roy’s comments. Later, back at the firehouse, he can’t concentrate on anything. He just has to know how that episode of “Adam 12” turned out! Desperate to give Johnny the answers he’s looking for, Roy calls his wife (on a rotary phone), who watched the episode, to find out how Reed and Malloy escaped. But she doesn’t know! She was distracted during a key sequence and missed the resolution. She reveals that the bad guys had cuffed Reed with his own handcuffs, but that’s all she saw.

Johnny is beside himself. After completing another mission he calls a friend of his hoping to learn more -- but that friend had gone to the movies and missed “Adam 12.” (Why it took Roy and Johnny so long to think to call other people and ask about the show may be puzzling, but remember, the narratives in television dramas moved a lot slower back then.)

Near the end of the episode, Johnny is injured while rescuing someone and ends up in the hospital. A sympathetic Roy offers to call the local TV station in the morning and find out how the “Adam 12” episode ended. But for some strange reason Johnny no longer cares.

“What for?” he asks when Roy offers to make the call. “You’ll just ruin the rerun for me next summer!”

A bizarre footnote: McCord and Milner appeared in the pilot episode of “Emergency!” as Officers Reed and Malloy. And you thought the whole “meta” thing started with “Supernatural."

tv
4 comments about "An Episode Of 'Emergency!' Recalls Life Before VCRs and DVRs ".
Check to receive email when comments are posted.
Read more comments >
Next story loading