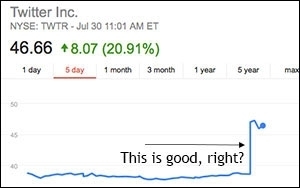 A week after Facebook announced that it rode mobile to a successful Q2, fellow social media giant Twitter had similar news. Twitter’s Q2 revenue was $312 million, with advertising revenue making up $277 million of it.

Of that $277 million, 81% came from mobile ads. But how much help was MoPub, the mobile ad exchange Twitter acquired last year?

Last month SunTrust Robinson Humphrey listed Twitter stock as a “Buy,” and SunTrust analyst Robert Peck singled out MoPub as the reason that the firm was bullish on Twitter. SunTrust estimated that MoPub would account for $56 million in revenue in 2014 (with the potential of reaching over $500 million by 2017).

MoPub’s specific contribution to Twitter was not disclosed in the company's earnings report -- and Twitter declined to further break down its earnings when reached for comment -- but Brian Wieser, senior analyst at Pivotal Research Gorup, told Real-Time Daily that he estimates MoPub generated around $15 million in revenue during the quarter. (MoPub is included in the “data licensing and other revenue” section in the earnings report.)

So what does it mean? It means MoPub is becoming a more important part of Twitter’s overall business faster than expected. Remember, SunTrust estimated $56 million in revenue from MoPub in 2014 -- and that was a bullish estimate. Now, less than two months later, another analyst is estimating $67 million will be generated from the ad exchange.

But he pointed out that “MoPub’s importance goes well beyond the revenue it generates,” noting that there “is incremental value to an ad network such as the one they are building, and it also gives Twitter a broader read on what is happening in mobile advertising in general.”

“Basically,” he continued, ”you can imagine that eventually there are three players that will really matter in mobile, those with the most proprietary data who use that data to add value to advertising off of owned and operated properties -- Google, Facebook and Twitter.”

Speaking of Facebook, the contrast between Twitter’s use of MoPub and Facebook’s use of the Facebook Exchange (FBX) will be interesting to watch. The industry is doubtful that Facebook will put mobile inventory up for real-time bidding (RTB) on its exchange anytime soon, while Twitter is making good use of mobile RTB. And for now, both strategies seem to be working.