How is it possible that while our industry talks about cross-screen buying and integrated campaigns, convergence has still managed to sneak up on us?  Think about this:  PewDiePie’s 350 million views in June are literally 35 times more than the 10 million audience for “Breaking Bad”’s season finale. It’s obviously not apples to apples – but convergence is here. We’ve reached the equalization of talent and content across all media. So how did we miss it? The answer has to do with navel-gazing.

As a whole, industry media and our industry itself frequently focus on non-consumer-facing events – causing us to miss big picture shifts in the landscape.  Apologies to Variety, but a recent article  in the pub shows a subtle but clear bias.: “YouTube Stars More Popular Than Mainstream Celebs Among U.S. Teens.”

“That’s the surprising result of a survey Variety commissioned in July that found the five most influential figures among Americans ages 13-18 are all YouTube faves, eclipsing mainstream celebs including Jennifer Lawrence and Seth Rogen,” writes Suzanne Ault. “The highest-ranking figures were Smosh, the online comedy team of Ian Andrew Hecox and Anthony Padilla, both 26.

"Despite having minimal exposure in the mainstream media, another comedy duo, known as the Fine Bros., Benny and Rafi, finished a close second, followed by the Swedish videogamer who has the most subscribers on all of YouTube, Felix Arvid Ulf Kjellberg — otherwise known as PewDiePie."

Variety, which bills itself as “the premier source of entertainment news,” is surprised that PewDiePie and his 29 million subscribers on YouTube, over 10 million more than the next most subscribed star, is more influential than Jennifer Lawrence, a young woman who does a movie once a year? 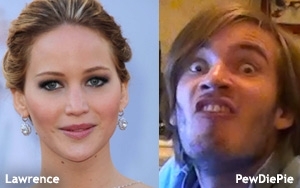 I spent well over 20 years in the world of episodic television and traditional, TV commercial advertising.  So don’t take this as a digital complaint.  But in the digital world where I reside now, names like Smosh, Rhett & Link, and Nigahiga are well known.  I haven’t forgotten about Ken Burns or Ryan Seacrest or Mike Rowe or Paula Deen.  Nor have I ignored Pharrell or Skrillex. . I can find Mike Rowe on my phone through a television series or a digital original, and I can find Jerry Seinfeld on a TV through a Crackle app.

Even the language used in the article – YouTube stars are more popular than “mainstream” stars – signals an unwillingness to accept the current realities, and is a subtle way of dismissing mega stars.  What is the threshold for the word “mainstream?” Clearly 29 million is too low.  Grace Helbig, a terrific young YouTube star, has just 1.8 million subscribers on YouTube.  But she is moving to TV on E!, so I guess now she will have an audience.  Thank you, mainstream!  Oh, wait – how will those 568,000 prime-time viewers help Grace?  Oh, maybe it’s because 155,000 of them are women 18–34.  That must be it; I can’t imagine that very many of her 1.8 million subscribers are young women.

I’m afraid that we and our clients are as dismissive and disdainful of Smosh, Epic Mealtime, and Tobuscus as are grandparents were of The Beatles and Elvis Presley. Our shameful misunderstanding of the power, impact, and value of emerging stardom is the only thing standing between “mainstream” and…well, how would you describe 29 million fans?  Convergence is here; we’re just not purchasing it with our advertising dollars.  And I’ll say it: It’s because we’re too damned old and set in our ways.