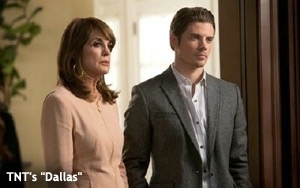 "Dallas" -- the series with the most exciting theme song in the history of television -- resumes its third season tonight after a prolonged hiatus balancing more cliffhangers than I can recall over the five decades that this plot-driven prime-time soap has been a part of our lives (including regularly scheduled episodes in the ‘70s, ‘80s and ‘90s; reunion movies in the ‘90s; a reunion special in the 2000s, and of course this new series -- or more accurately, this continuation of the old -- that began in 2012).

The last time we visited Southfork, the grand Ewing homestead was in flames. Will it endure? How can it not? Bobby and his son Christopher were inside. Will they survive? A dead-drunk Sue Ellen was also in there, passed out on the floor. Will she live? Will she sober up? Pamela had overdosed during a three-way with John Ross and Emma. Will she survive? Will John Ross stay with Emma? Bobby and Ann’s marriage was breaking apart. Will they stay together? The war for Ewing Energies was raging. Will there ever be peace -- not only between the Ewing and Barnes families, but within the Ewing family itself?

And of course, there is an even bigger cliffhanger in play: Will TNT renew “Dallas” for a fourth season?

TNT has been awfully quiet this year about the fate of the show. Every question asked of every executive at the network has been met with a diplomatic but noncommittal response. TNT included “Dallas” in its upfront presentation last May, and series leads Patrick Duffy, Linda Gray and Josh Henderson attended the exclusive press luncheon that followed. But even they didn’t know if their show was going to continue -- or if they did, they did an awfully good job of hiding the truth one way or another.

Overall, TNT has been having a great summer, with new series “Murder in the First,” “The Last Ship” and “Legends” making much noise and veterans “Falling Skies,” “Major Crimes” and “Rizzoli & Isles” doing just fine. Indeed, “Murder” -- which just concluded its first season -- was the summer equivalent of a great poolside read, while “Major” has remained the network’s best show, even with the loss of the much-missed Kyra Sedgwick from the franchise (which was formerly known as “The Closer”).

But to date, “Dallas” hasn’t been part of all that summer heat. It never really struck me as a summer series to begin with -- it seems more like a fall and winter show, but maybe that’s because those were the seasons in which “Dallas” dominated television during its legendary 1978-1991 run.

I think the biggest problem with “Dallas” has been the storytelling -- specifically, the plots involving the new generation of Ewings and their contemporaries have not been daring enough to attract younger viewers to the franchise, while those stories that spin around the many legacy characters on the show have been too uneven and often unappealing. Did anyone want to watch Bobby Ewing fight gastrointestinal cancer, a big story line in this revival’s first season? Does anyone who has invested years in this show really want to watch Sue Ellen backslide into alcoholism? (Interesting side note: The season in which Sue Ellen truly bottomed out on booze was actually the one that turned out to be a crazy extended dream of Pamela Ewing’s.) I thought it was wholly believable that Sue Ellen might be tempted to drink when J.R. died, and it was interesting to watch her try to hide it from her family. But Sue Ellen -- arguably one of the most fascinating female characters in the history of television and easily the most compelling throughout the ’80s -- deserves better in her senior years than another epic battle with the bottle. (Where is Dusty Farlow, the other great love of her life, when Sue Ellen needs him most?)

And then there’s J.R.’s life-long nemesis, Cliff Barnes, who suffered mightily for decades at the hands of his enemy and is now an old man stuck in a nasty jail in Mexico. That isn’t exactly a pleasing plot development, either.

At least Ken Kercheval, the actor who has played Cliff Barnes since 1978, has something to do when he makes one of his recurring appearances. “Dallas” has done a terrific job of bringing back many other stars from the original series, including Steve Kanaly (as Ray Krebbs), Charlene Tilton (as Lucy Ewing,) Ted Shackelford (as Gary Ewing), Joan Van Ark (as Valene Ewing), Audrey Landers (as Afton Cooper), Cathy Podewell (as Callie Ewing) and Deborah Shelton (as Mandy Winger), but the writers haven’t given any of them anything interesting to do! They come, they go, they are once again forgotten. (Van Ark was on fire in her scenes. Why hasn’t she returned?)

The sudden death of Larry Hagman last year dealt a serious blow to this show, necessitating the end of J.R. Ewing, the character who powered it more than any other throughout its historic run. The story of how J.R. died took several twists and turns but was never interesting enough to command much attention and, at the last, didn’t seem an appropriate farewell for this iconic character.

All of those complaints aside, the basic foundation of “Dallas” is still intact, and enough new characters have been established to give it more forward momentum, though I think some of them have already grown stale and need to be weeded out. I’d like to see J.R.’s other two sons (by Vanessa Beaumont and Cally Harper) and Bobby’s son Lucas (by Jenna Wade) turn up in at Southfork with or without spouses and stir things up.

Furthermore, if a couple of the legacy character were seen more often and given more to do, and if the show were moved to the winter months (when that Texas sun and heat would be welcomed by people in most parts of the country), then it might become the essential prime-time soap that it wants and needs to be.

After hundreds of episodes and a handful of movies spanning five decades, would one more season for this iconic franchise be too much to ask?