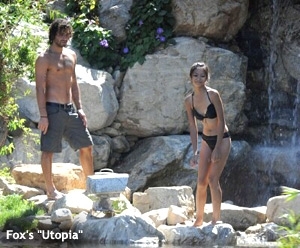 The 2014-15 television season doesn’t officially begin until September 22, and already it has yielded its first apparent fail: Fox’s reality series “Utopia.” Given the intended scope of this series, perhaps the overused expression “epic fail” applies.

Depending on one’s perspective, the initial ratings for this show fall somewhere between modest and dismal, which should come as no surprise to anyone. “Utopia” has not been well received or generated any significant buzz since Fox revealed back in May that it would occupy two of the 15 hours the network programs in prime time. Its bizarre concept -- in which 15 people from various regional, ethnic, religious and political backgrounds are plunked down in an unknown area for one year and tasked with the development of a new society during that time -- didn’t seem so much like a new idea as an unwieldy expansion of an old one, “Big Brother.”

Apparently, one of those people -- referred to as “pioneers” -- will be sent home every month and replaced by a newcomer, a strategy intended to keep the franchise fresh. Unfortunately, one hour into the show’s special two-hour premiere on Sunday, the franchise already felt stale -- perhaps because there was nothing happening that hasn’t already been observed countless times on countless reality shows (of both the competitive and observational varieties). There was plenty of strife and conflict and relationship drama and stubbornness and tension, along with an overriding sense of physical hardship and a general lack of hygiene. There was even a heaping helping of skinny dipping with plenty of pixilation to keep the overly sensitive from reaching for their defibrillators. (Once upon a time, I think all that blurred nudity would have been either shocking or titillating or both … but the lackluster response this summer to the VH1 flesh fest “Dating Naked” indicates that a lot of skin doesn’t make for a win.)

And yet the show felt airless.

Even for those with an insatiable appetite for such stuff, there was so much fussing and fighting at the start as the pioneers got to know each other that it wasn’t long before I wanted to get away from all of them. Just a few minutes in, one man was already behaving like a child and tossing a temper tantrum. (He wanted to keep all of the belongings he had brought with him even though everybody else was agreeably editing through their items and making tough choices.) Shortly after that another guy got drunk and made an aggressive and inappropriate sexual advance toward one of the women, which frightened many of the other women and prompted the Manhattan lawyer in the group to cobble together a court and put him on “trial.” Would the group vote him out or let him stay? (Spoiler alert: He’s still around. Meanwhile, the woman he attempted to force himself on, who was also drunk, spent the next day spewing such copious amounts of vomit that the “Utopia” experience was temporarily put on hold so medics could rush in and take care of her. She’s still around, too.)

All the overwhelmed pastor in the group could do -- twice during the first two days -- was go off by himself and cry. I know how he felt. Before long almost every one of the people in the title locale were working my last nerves, so much so that I couldn’t wait for it to be over and I couldn’t imagine suffering through any further episodes unless I absolutely had to (in other words, if “Utopia” had been a hit out of the gate, or if, heaven forbid, it reverses course and begins gaining momentum).

I think the most irritating moments in the show were those in which one pioneer would tell another, “this is your Utopia.” (That happened very often, usually in attempts at conflict prevention or resolution). Also disturbing were the spots during commercial pods informing viewers that they could download a “Utopia” app and enjoy free 24-hour access to these people in the palm of their hands.

Am I being too harsh here? I don’t think so. I can actually imagine “Utopia” working with a more appealing cast of pioneers. I have wondered if the people in the first episodes of the show were truly the best and most interesting people the producers could find during the casting process. Maybe people who are more likable know enough to stay away from such things.

Regardless, according to reports ratings for the three hours of “Utopia” so far have not been promising. That isn’t necessarily the kiss of death anymore for scripted series, which now have days or weeks or even months to build up their final ratings figures and/or demonstrate their Future Viewing Potential on lucrative streaming service platforms. In general, reality series don’t enjoy such modern-day measurement perks -- in most cases strong audience support during their first telecasts are still critical. There are exceptions, and perhaps “Utopia” will prove to be one of them. But I can’t imagine Fox keeping it on twice a week if it doesn’t show some improvement, and quickly. Maybe it would work better on one of Fox’s sibling networks. Or maybe it would be better to admit defeat now.

tv
1 comment about "Is Fox's 'Utopia' The New Season's First (Epic) Fail?".
Check to receive email when comments are posted.
Next story loading