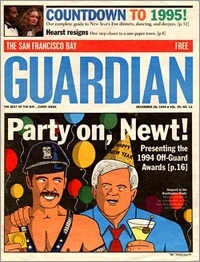 The long-term decline in print newspaper advertising has claimed another victim among alternative community weeklies, with Tuesday’s revelation that The San Francisco Bay Guardian will cease publishing its print edition following its final issue on Wednesday, Oct. 15.

First published in 1966, the tabloid-format paper found a ready audience for its decidedly left-leaning reporting and opinion, as well as its coverage of the colorful Bay Area cultural scene. Beginning in 1974, it also published a much-anticipated annual “Best Of the Bay” issue.

However, like other newspapers, it suffered from the decline of print as circulation fell from around 165,000 in the early 1990s to 50,000 in 2014. In 2008, the Bay Guardian won a lawsuit against rival SF Weekly for undercutting its ad rates with predatory pricing practices, and in 2013, it was acquired by SF Weekly publisher SFMC, fueling speculation that the newspaper’s days were numbered.

In an email to staff, publisher Glenn G. Zuehls explained the decision: “Unfortunately, the economic reality is such that the Bay Guardian is not a viable business and has not been for many years.”

According to Zuehls: “When SFMC took over the publication, the company believed the publication’s finances could rise out of the red and benefit from joining forces with the Examiner and the Weekly. We have tried hard to make that happen over the past few years… Since then, I have come to realize that this isn’t possible and that the obstacles for a profitable Bay Guardian are too great to overcome.”