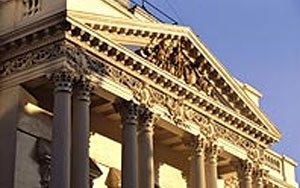 The Screen Actors Guild and other unions representing performers are siding against Google in a dispute centering on whether the company should be forced to remove the clip “Innocence of Muslims” from YouTube.

The unions are asking the 9th Circuit Court of Appeals to rule that actors can own a copyright interest in their performances in movies. But the SAG and other unions also say that actors should only be able to claim these rights in “extraordinarily rare” circumstances.

The SAG and other groups — including Actors' Equity Association and American Federation of Musicians — are asking the appellate court to leave in place a controversial decision that required Google to remove the 14-minute clip “Innocence of Muslims” from YouTube. In February, a three-judge panel ruled that actress Cindy Lee Garcia, who appeared for around five seconds in the clip, had a potential copyright in her performance.

Garcia alleged that she was duped into appearing in the clip after answering a Backstage ad for the film "Desert Warrior," which she thought was an adventure movie set in ancient Egypt. After “Innocence of Muslims” appeared on YouTube in September 2012, the was blamed for sparking a wave of protests in the Mideast. Garcia alleged in court papers that she received death threats after the film was posted to YouTube and lost her job, due to security concerns sparked by her appearance in the movie.

She alleged in a lawsuit filed in late 2012 that the clip infringed her copyright in her performance, and sought an injunction requiring Google to remove it.

A trial judge ruled against Garcia.

But in February, a three-judge panel of the 9th Circuit granted the actress's request for a preliminary injunction ordering Google to remove the clip, pending a trial on the copyright issues.“We need not and do not decide whether every actor has a copyright in his performance within a movie. It suffices for now to hold that, while the matter is fairly debatable, Garcia is likely to prevail,” Circuit Court Judge Alex Kozinski wrote at the time.

Google took down the clip, but also asked the appellate court to reconsider the ruling. Last month, the court agreed to hear the case “en banc” — meaning that 11 of the 29 active judges in the circuit will consider the matter.

A host of outside companies, news organizations, digital rights groups and law professors have weighed in on Google's side. Netflix, which is among the companies backing Google, argues that the panel's earlier ruling could empower almost anyone who appears in an online video to assert a copyright interest in the clip and demand its removal.

Facebook, Twitter, Yahoo, eBay and Gawker Media add in a separate friend-of-the-court brief that the panel's order is “unworkable” and “poses a serious threat to online service providers’ businesses.”

The Screen Actors Guild and other unions dismiss those concerns. “The court should be very doubtful that very rare take-down requests generated from dramatic performers could impose any significant burden on internet service providers,” the trade groups write.

The organizations say that the custom in the movie industry is to hire actors as employees, in which case the employer automatically owns any copyright in the performances.

The unions also downplay concerns that people who appear in user-generated content, documentaries or unscripted shows will be able to assert a copyright interest in those clips. “Programming that relies heavily on unscripted interviews and similar contributions will not be impacted by acknowledging copyrights in performers’ creative contributions because such contributions will typically lack the requisite 'modicum' of creativity required to be considered an 'original work of authorship,'” the unions argue.