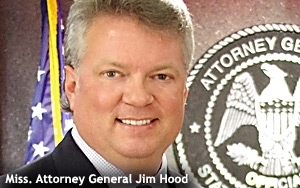 Google won't have to face any potential lawsuits by Mississippi Attorney General Jim Hood until at least next year, thanks to an order issued on Monday by U.S. District Court Judge Henry Wingate in Jackson, Miss.

Wingate said in the order that he was pausing all proceedings in the dispute between Google and Hood, according to court records. While the judge didn't officially enter the temporary restraining order that Google had requested, the “stay” he issued appears to have the same practical effect.

Specifically, Wingate's order provides that Hood can't try to enforce a subpoena for documents from Google until at least March 6. He also directed Hood to file papers by Jan. 18 opposing Google's request for an official injunction, and scheduled a hearing about the matter for Feb. 13.

The move pauses a dispute between Google and Hood that had escalated into litigation on Friday, shortly after emails disclosed in the Sony hack revealed that Hollywood was working closely with state law enforcement authorities to target Google for allegedly enabling piracy.

Google on Friday sought a temporary restraining order prohibiting Hood from bringing charges against the company. Google also sought to prohibit Hood from enforcing a subpoena demanding information relating to outside companies — including operators of sites that Google indexes in its search engine — that allegedly play a role in copyright infringement.

The search company alleged that Hood for months threatened to sue the company, or even prosecute it criminally, unless it blocks “objectionable” content created by consumers or outside companies.

When Google didn't agree, Hood responded with an “enormously burdensome” subpoena that would have required Google to produce millions of documents, the company alleged. The hacked emails about “Project Goliath” — the code name for Hollywood's anti-Google campaign — reportedly showed that a lawyer for the Motion Picture Association of America actually drafted a set of demands that Hood sent to Google.

Hood said in a statement that the judge's order “will allow the State to file the necessary briefs to respond to Google’s lawsuit that was thrust upon us by a company worth $382 billion ... and give the parties additional time to attempt to reach an amicable resolution.”