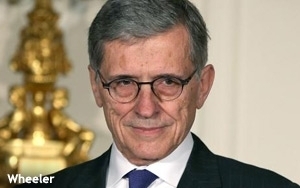 Federal Communications Commission Chairman Tom Wheeler intends to propose that the agency revise the definition of broadband to Web connections offering speeds of at least 25 Mbps downstream and 3 Mbps upstream.

That report also will conclude that broadband isn't being deployed in a "reasonable and timely fashion," especially in rural parts of the country.

Overall, almost one in five Americans (17%) lack access to connections at speeds of at least 25 Mbps, according to the FCC. In rural areas, high-speed broadband is even scarcer, with 53% of rural Americans lacking access to broadband connections of a least 25 Mbps. That speed is fast enough to download a 6-gigabyte movie in 16 minutes, according to a separate report issued late last year by the Commerce Department.

The FCC notes in a three-page summary of its upcoming report that people increasingly are purchasing connections of at least 25 Mbps. In 2013, 29% of consumers living in areas where that service was available adopted it, up from just 7% in 2011.

Some broadband advocates have long argued that the FCC should redefine broadband as Internet speeds of at least 25 Mbps. The organization Public Knowledge wrote in a filing last year that the 25 Mbps standard will insure that “average households have adequate capacity for online video and other applications.”

A spokesperson for the organization said today that a redefinition upwards “can boost the broadband economy, including online content.”

“There's a chicken-and-egg problem with broadband, where high speeds beget applications that can use those speeds, but many people won't subscribe to higher speeds until the applications exist,” the spokesperson said in an email to Online Media Daily.

Much of the current demand for faster connections seems driven by the availability of streaming video, which is now the dominant broadband application, according to the FCC.

Internet service providers are likely to weigh in against a redefinition of broadband, given that some already are on record as opposing a more modest FCC proposal to redefine broadband as speeds of 10 Mbps downstream.

“The Commission suggests that raising the threshold may be necessary due to increased usage of Internet applications and devices,” the industry group National Cable and Telecommunications Association said in an FCC filing last year. “It is true that usage is increasing, but this increased usage has not changed the nature of voice, data, and video traffic or the capability required to handle that traffic.”