Text-Spam Case Against Lyft Suspended Until FCC Weighs In 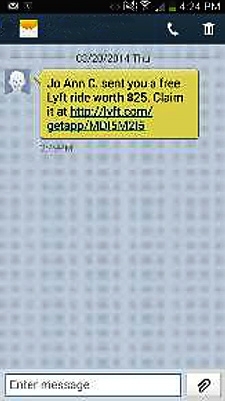 A federal judge said this week that she will await guidance from the Federal Communications Commission before continuing proceedings in a lawsuit centering on whether Lyft's “invite friends” feature violates an anti-spam law.

U.S. District Court Judge Marsha J. Pechman in Seattle said that contradictory decisions by other judges about the scope of the Telephone Consumer Protection Act show the need for a “uniform interpretation” of the measure by the Federal Communications Commission.

The FCC is currently considering petitions by two companies that argue the invitational text messages don't violate the anti-spam measure.

The move delays a battle dating to last April, when Washington state resident Kenneth Wright sued Lyft for allegedly violating the Telephone Consumer Protection Act by engaging in an “aggressive marketing campaign” that involved sending him an unwanted SMS message.

His lawsuit focuses on Lyft's “invite friends” program, which allows Lyft users to send SMS messages to all of their contacts, inviting them to sign up for the service. Lyft promises to pay people up to $25 for each contact who accepts the invitation and uses the service, according to Wright.

He argues that the program runs afoul of Telephone Consumer Protection Act, which prohibits the use of automated dialers to send SMS messages to people without their consent.

Lyft countered in court papers that the lawsuit should be dismissed for several reasons, including that its system doesn't use “automated dialers.” Like other Web companies facing similar litigation, Lyft contends that automated dialers must themselves generate phone numbers, not merely send messages to numbers from lists provided by people.

Federal judges confronting the same issue in other cases appear to be divided on the definition of automated dialers, and appellate courts haven't yet weighed in.

Lyft also argued that the lawsuit should be thrown out because the alleged “invitational text” originated with another user, as opposed to the service.

Alternatively, the company sought to delay the lawsuit while the FCC considers questions about the anti-spam law. The agency currently is weighing petitions by Glide Talk and Text Me, who are seeking a declaratory judgment that invitational texts don't violate the measure.

Pechman said in her ruling suspending the lawsuit that the Glide Talk and Text me petitions “ask the FCC to resolve to the very issues that this case would require the court to resolve.”

She added: “While staying the case may result in some delay, the court does not find that the delay in awaiting a ruling from the FCC on these highly relevant issues outweighs the reasons favoring issuance of the stay.”