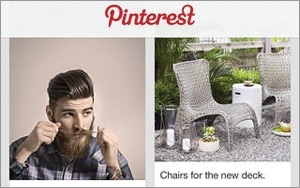 Trying to balance business interests with user satisfaction, Pinterest has decided to remove affiliate links from its platform.

“Recently, we observed affiliate links and redirects causing irrelevant Pins in feeds, broken links and other spammy behavior,” a Pinterest spokesman explained on Friday. “We believe this change will enable us to keep the high bar of relevancy and quality Pinners expect.”

Never a huge fan of affiliate business, the pin-based social network has been automatically removing related links for several years.

A few exceptions were made for those affiliate businesses that were “maintaining good quality," the spokesman tells Social Media & Marketing Daily.

But, not anymore. As a result of the new policy, Pinterest is expecting clickthrough rates to be faster, while users should encounter fewer broken links.

“There will also be less irrelevant Pins in the home feed caused by following some group boards,” the spokesman assures.

“This is not about monetization,” he said. “This is 100% about the Pinner experience and ensuring relevant content on Pinterest.” While affiliate links may not be part of its plan, Pinterest is aggressively pursuing various monetization opportunities.

Pinterest officially launched Promoted Pins at the beginning of the year, after nearly eight months of testing. Initially, the program gave brands more visibility by featuring their pins in search results and category feeds.

Per internal findings, Promoted Pins are already being “repinned" an average of 11 times — the same as nonbranded pins. To improve its pin recommendation process, Pinterest just recently acquired the machine learning specialists at Kosei.

Venture was first to report on Pinterest’s decision to nix affiliate links, on Thursday.