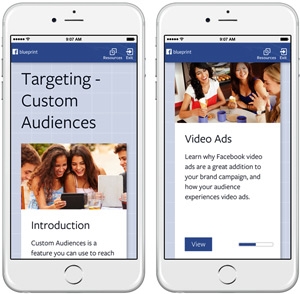 Trying to steer more ad dollars in its direction, Facebook this week is rolling out a new educational program for agencies and brands. The program combines online courses, in-person training and certification on campaign optimization and measurement.

Facebook said marketers had been asking for more effective ways to reach its global community of nearly 1.4 billion consumers. “The No. 1 request from agencies, partners and clients alike is additional training resources,” a company spokeswoman said on Tuesday.

Prior to its official launch, Facebook said it tested Blueprint with more than 900 marketers from six holding companies, along with marketing partners from 11 countries.

Anchoring the initiative is a new eLearning center, which features over 35 online courses on direct response marketing, digital buying and other disciplines.

For small businesses, a new Learn How online learning center covers the basics from hosting a Facebook Page to effective use of videos and images.

Facebook this week is also updating its Facebook for Business Web site with a cleaner look and new content. The social network's  small- and medium-sized business strategy already appears to have achieved critical mass. The social giant recently surpassed 2 million active advertisers -- most of which are SMBs.

The milestone followed aggressive efforts by Facebook to get SMBs spending more on its platform.

Last summer, the company launched a five-city tour led by Dan Levy, Facebook’s director of small business, to sell small businesses on the power of paid social. As part of that effort, Levy emphasized Facebook’s ability to reach consumers on mobile devices, where Facebook users spend most of their time.

More recently, Facebook developed a “Local Awareness” ad unit that can target potential patrons within a certain radius of a business’ address.

Facebook also recently debuted an app for advertisers to manage their ad campaigns on the go. With the app, partners can track ad performance, edit existing ads, edit ad budgets and schedules, receive push notifications, and even create new ads.

Industrywide, more SMBs are using social media to augment their ad efforts, and their search campaigns in particular.

SMBs that spend more than $25,000 annually on advertising and promotion plan to allocate 17.4% of their marketing budgets to social media in the next 12 months, according to recent findings from BIA/Kelsey's Local Commerce Monitor service.

Beyond the note from Zuckerberg and Sandberg, on Tuesday Facebook declined to elaborate on its small business strategy.